Dance With Me @ 24 Hour Fitness

The other day I was asked if I wanted to attend a class at 24 Hour Fitness called "Dance With Me" and I have to  admit, I hesitated at first.  Me in a dance related fitness class?  With my two left feet?  I eventually decided I'd go and hang in the very back of the class.  I became more comfortable as the class filled up and  I began to see everyone from teenage boys and girls to senior citizens in the group.  At this point I figured I could do it.  The first ten minutes were tough as I struggled to feel the rhythm and let myself go.  But after a group line dance, my stress and worries went away and I was having the time of my life.  I was laughing and cheering on others in the class.  All in between learning a few new dance steps and sweating my ass off.  By the time the one hour class was over I was ready for more.  After class, I sat down with Billy Blanks, Jr and his wife Sharon Catherine Blanks to talk about the class. 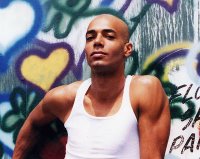 A little background on Billy Blanks, Jr and his wife Sharon Catherine Blanks.  As you have probably already guessed, Billy is the son of Tae Bo Kicking exercise legend Billy Blanks.  Billy is a professional dancer who has performed on Broadway in Fame and 42nd Street.  His wife Sharon Catherine Blanks is a Broadway singer and dancer and has performed in Rent, Dreamgirls and others.  Together they perform as a rock / soul duo called

"The Blanx".  Billy and Sharon have taken these years of Broadway experience and combined it with exercise to form the 24 Hour Fitness Group X class “Dance With Me” which is now offered to members at the Sherman Oaks and Hollywood Sport club locations.

"Dance with Me" is a group excercise class that takes dance movements from hip-hop, Latin, ballroom, bollywood, broadway, belly dancing and jazz all mixed in with cardio movement.  Classes mix it up with various dance styles.  Each style offers a different type of workout for different parts of the body.  Stretching, high intensity cardio, core work, strength training and pretty much an all around workout.
Sharon commented that she is very excited about this class as it has grown very quickly.  It's cool that different people attend these classes from all walks of life.  A few weeks ago an older man approached her and told her he was just going to warm up during the beginning of the class.  By the end of the class he was still dancing.  Afterwards, he came  up to Sharon and told her how excited he was about this class.
The day I attended the class we warmed up before moving to some cardio to get the heart rate up with a bit of latin/samba music.  For a bit we did some Broadway tunes and even did the Charleston.  I gotta admit doing the Charleston was fun.  Even when I danced into a few of the classmates.

Both Billy and Sharon talked about how you can’t help but smile when dancing.  Both instructors have the attitude that in this class participants should just do the best they can according to their fitness level.  Billy talked about one of the younger class members who at first told Billy that he had two left feet and he was a bit worried.  Billy assured him that all he had to do was have fun.  A few classes later this young man was in the front row of the class dancing up a storm.  I got to tell you that story was just one of many I heard from people I talked to before the class started.

Sharon starts the class talking about the importance on breathing during excercise. She instructs participants to inhale through the nose and exhale through the mouth. She called it "diaphragmatic breathing".  Throughout the class both Billy and Sharon remind everyone to breathe. Sharon said that when she was on stage she gave 200% and was constantly working to be a stronger performer. She knew that by breathing correctly she would have more stamina. She commented, "Performers who sing and dance are in shape because they're breathing correctly."  Sharon also reminds the class not to pant but to breathe. She warned that, "Panting is not controlled breathing and one can hyperventlate".  She also commented that in class we need to be careful when reaching down to pick up the bottle of water as one can get dizzy.  During the class Billy talks about the benefits of singing out loud while working out just like the military do on marches.  This helps to build stamina and endurance.  Also, by breathing correctly during excercise one can double the amount of calories burned.

One last thing about breathing is that Billy recommended that everyone should wake up 5 minutes early every day and just lay in bed practicing breathing. It may sound simple but 5 minutes a day of diaphragmatic breathing will make breathing while working out that much easier.

During the class Billy dances around the room interacting with the class members. Everyone is singing, cheering and having a blast. From time to time we pair up and form groups. You forget that you are working out. The class takes a life of its own. Sharon commented that she never experienced a trainer like Billy who encourages everyone so much. While I was dancing about and having the time of my life, I kept hearing Billy talk about taking out our daily stress out in this class by dancing and yelling out loud.  When Sharon talked about how you can't help but smile when you are dancing it really is true.  You just get all the days worries out of your head and just go with the music.

Hey there! Great post so far. However, I think you can learn more about weight loss and getting optimum low body fat by visiting this website! www.threesixtyhealth.com

It includes fitness tips, and teaches you getting in shape. Weight loss should not be done using extreme diets or related things like that! Getting in shape should be much easier. Find a fitness buddy and guide each other the path down low body fat today!