So yesterday was the USMS SPMA SCM swim meet at UCLA.  I guess that would be the USMSSPMASCMUCLA.  The meet was held at the new pool complex which is amazing.  Although I did have a few issues.  The locker rooms were too small, the water was a few degrees to warm and the pool itself is great but they didn't have the best lane lines.  I thought the pool was a bit choppy when I was swimming and those big wave busting lane lines would have made it an even better pool.  But damn it's a nice pool with a nice setting on campus. 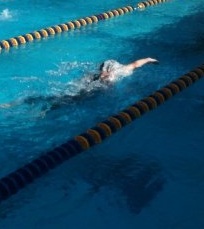 I got to the meet pretty early and warmed up as soon as it started.  I didn't warm up that much as usual.  In fact I think I warmed up way less then usual.  I figured I'd warm up closer to my heat.  With the 800 being first I gueestimated I'd have an hour between warm up and my heat.  I wore a pink splish bathing suit for warm up.  Sparkle Sparkle!  A few heats before mine I went and put on my blueseventy nero comp suit.  With the hot sun beating down on me I soon discovered I had put the suit on too early.  Oh well.  I got in the water and did a few laps to cool off, warm up and adjust my suit.  Then I had to pee so I had to get back in and re-adjust my suit again.

As I got on the blocks I was a bit upset that we didn't have a chance during warm up to dive off the blocks so I'd have a feel for it.  So I slowly edge my feet with little baby steps till I got to the end and slowly went down with my arms for the start.  I gotta admit I was nervous of making a false start.  Once in the water I had a pretty descent start and streamline.  I did feel a bit to deep so I made the mistake of looking up to see.  The first 250 felt great.  I didn't feel like I was going to fast and actually thought I could pick it up a bit.  I haven't seen my splits so who knows if this was the reality of the moment or just something in my head.  I stepped it up a little bit for the next 200.  Then disaster hit at 450 SCM!  On my 19th lap I seemed to be taking in water.  Swallowing water when I was trying to catch oxygen.  It wasn't a big deal at the time but another 200 meters and disaster came calling with dry heaves.  It was like my body was going into shut down and rejecting the water I had swallowed.  I was dry heaving and the flip turns were becoming the time when I just thought I was going to toss my cookies.  Turn after turn.  I was dry heaving while I was swimming so breathing was getting tough.  So much so at one turn right before my flip I picked my head out of the water as if I was doing butterfly.  I did that on 2 turns.  Finally with about 5 laps to go the turn of hell happened.  As I was flipping over the dry heaving became a not so dry heave and chuncks flowed down my face as I was flipping over.  At that moment my turn came into a freeze frame and I had to decide if I was to go on or just stop.  I pushed off the wall and just prayed that I could swim these last 5 laps.  I was still dry heaving all the way on every lap.  I was getting tired, worn out and stressed out.  I kept thinking I can just stop now.  No big deal.  When I got to my last 50 I pulled myself together and tried to go as fast as I could.  On the last 25 I figured I just needed to get to the wall and then I could puke as much as I wanted into the gutter.  When I finished I was shocked at my time.  9.49:82.  That is three seconds faster then my fastest 800.  Wahoo!

Of course that  would be the only joy in my swimming for the day.  My 100 fly was just a mess.  It's not that it felt bad for the first 50 I was just slow.  The last 25 of the 100 fly wasn't pretty and I was just trying to get going.  I ended up swimming my slowest 100 butterfly ever and was off my best time by 5 seconds.  The 100 backstroke was in the same league.  What had happened?

I guess I can try to over think my swims yesterday.  Why were my 100's such slow swims.  I've been sick.  It hasn't been a good swim year for me since Nationals.  So many choices of excuses to pick from.  My first reaction to my swims was that I'll just not swim 100's anymore.  That isn't too smart.  Looking back I have to be happy with my 800 as for the 100's it just gives me something to work on in the pool.  Maybe I've been thinking too much about distance freestyle swimming and not enough time on fly and back.  Tomorrow is another swim day and I'll just keep at is and see how I do at Regionals in December.  This will be my last meet before I age up in swimming.  The Big 40 is coming!