Every so often I jump into this fun little photo / blog project called 12 of 12 by Chad Darnell LINK.  It's been some time since I've done one so I decided to do one this month.  Since I actually had something interesting for a change.  So here is my November 12 of 12 The REGAL Edition..

Picture One:  the gym 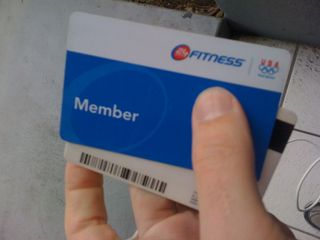 I run to the gym which use to be okay when I went to another gym.  The membership card was one of those keychain things.  So I could just run with that one little thing and a key.  No hassle even on days when I wear shorts without pockets.  But my current gym has the credit card sized card and asks for a picture id.  So I gotta hold them plus .50 cents to rent a locker on days that my running shorts don't have pockets.  Grrrr! 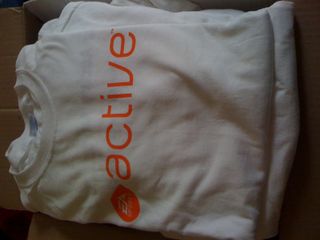 Let's Get Active.  Here are some promotional t-shirts for the EA Sports Active 5K Challenge.  In case you don't know EA Sports Active is a fitness game for the Wii and you can set up yourself a 30 Day Challenge with the game.  The 30 Day Challenge mixes up various mini-games / workouts over a 30 day period.  Well with the launch of EA Sports Active: More Workouts the folks of EA decided to have folks to do 5K.  So in cities accross America folks volunteered to organize online communties that would get together for training runs and then run one 5k in the local area before the launch of the new game on Nov 17th.  In LA the run is the Run For Her runforher.com 5k this Sunday.  These are the tee shirts I'll be giving to the EA Sports Active 5K Challenges. 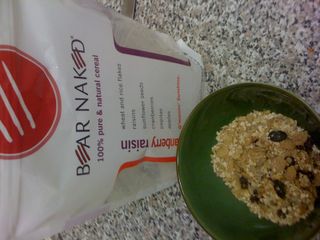 The best cereal in the world hands down flat is Bear Naked.  A bit pricey but so yummy!  Luckily when I purchased it the package had one of the tear and use instant coupons.  So it was cheaper then the almost 5 buck price per bag. 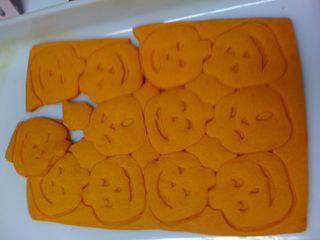 Nothing is better then leftover Halloween Cookies.  The day after Halloween the local supermarket marked down them to .99 cents a package.  I bought all they had since the expiration date was something like 2035.  Yummy sugar cookies! 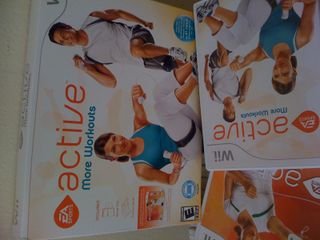 I got EA Sports Active More Workout a week before it goes on sale which will be Tuesday, November 17th so I started the 60 Day Challenge.  Today was to be Day 3 but I didn't play / workout since I played RockBand instead.  I'll have to make up for it by playing / workout on Friday! 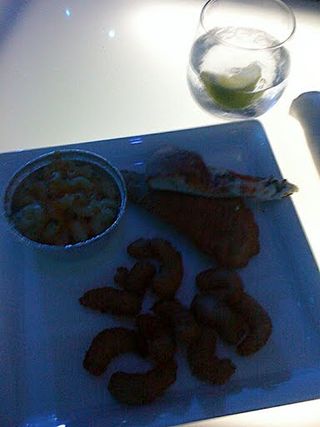 It was dark at the Palladium but here is some of the Wolfgang Puck catered food.  The little tin was Mac N Cheese.  So Yummy! 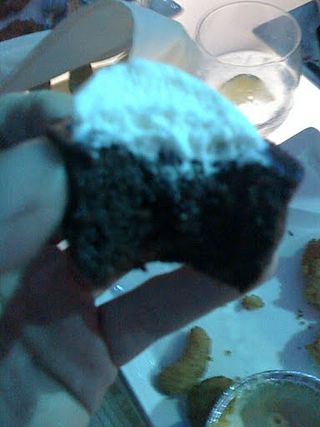 Oh My Gawd!  This is/was Wolfgang's version of the Hostess Cupcake.  And yummy!  The desert line was super long so we snagged one of these from the waiter. 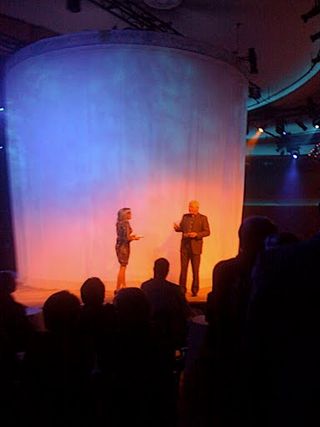 That is Maximum Bob Lutz of GM about to unveil the 2011 Buick Regal.  He's Vice Chairman of Global Product Development (his wiki page.)  Car enthusiast love this guy. 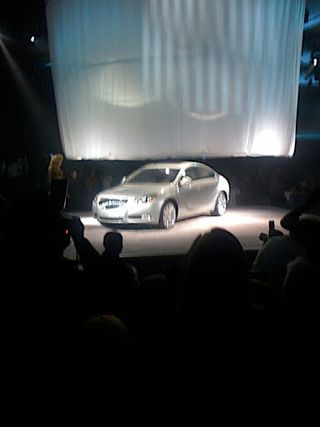 This isn't an infomercial or commercial but if you haven't seen a Buick lately you should.  On hand besides the all new 2011 Buick Regal were other Buicks.  I got into the Lacrosse and it was pretty spiffy.  Sorta a car fan boy here so I know that Buicks have gotten better and the Lacrosse has been getting really good reviews by car mags/blogs.  The Regal looks like a very nice car.  Looks really nice on the side. 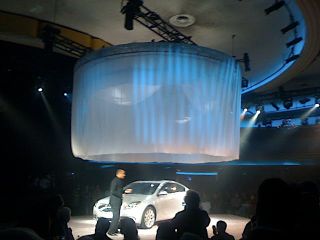 Ed Welburn is Global Vice President of General Motors Design and he was talking about the design language of Buick.  He was also in a Buick commercial a few years back talking about the design launguage of Buick.  We were able to see two other Buicks but we couldn't bring in cams/cellphones.  But one was the already cancelled re-badged CUV from Saturn Vue.  Buick had announced they were going to make it and then the internet went into a tailspin with car fans saying it was ugly so Buick pulled the plug.  Trust me the CUV looks better in person.  It's a shame Buick isn't making it.  But what do I know? 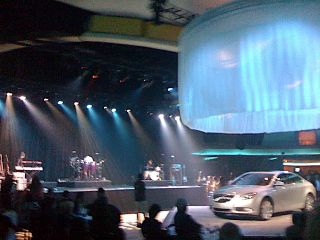 After the car show it was time for the music to start.  Behind the car was a stage and a backup band came out and started the show. 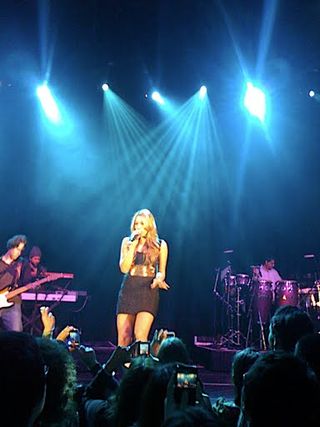 Colbie Caillat performed.  I do admit to liking one or two of her songs.  Was a nice way to end the evening.

I love food.  Learning to cook and bake has been some of the best moments of my life.  Mmmm....food!

Hahah I love how this post starts with talking about the gym, and how you run there and progressively through out the post it talks about food. I like you!

I think i'm gonna try out this WII thing.

That was a pretty eventful 12th!
You should look into getting a SpiBelt for your key/ID. I only have 4 pairs of shorts with suitable pockets (and I don't like wearing 2 of them) so my SpiBelt has come in handy!