Michael Phelps Ad Watch: We Surf The Internet, We Swim In Magazines

Michael Phelps appear in this ad from magazine publishers.  The campaign is basically about publishers trying to tell advertisers that print is still relevant to media buys.  According to the article in the WSJ -

"The Internet is fleeting. Magazines are immersive," says one ad, which is slated to appear in May issues of the participating publications. The first spread features a photo of swimmer Michael Phelps from ESPN The Magazine, with the headline "We surf the Internet. We swim in magazines." 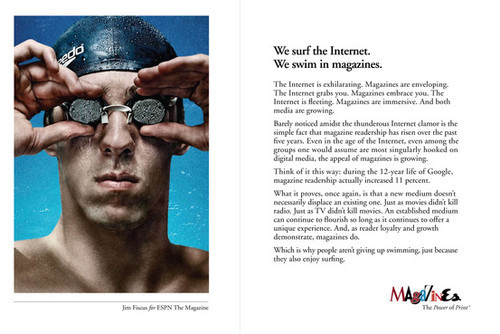 As some one who reads things off the internet, Kindle, magazines, daily newspapers and trade papers I still am old fashioned and like the print.  Long live print, but love live the internet!  More importantly the ad features Michael Phelps.