I had signed up for the USMS / SPMA UCLA SCY Meet for today so even thought last night I had second thoughts I decided to head to bed early and suck it up and swim.  After a bit of tossing and turning I woke up at 1am.  WTF.  This is like pre-marathon night.  But this time I don't have to be up for hours.  Knowing that I can't sleep unless the television is on so that it drowns out my thoughts of doubt I turned on the television.  It wasn't to some time after 3am that I fell back asleep.  DOH! This is not good.  Then after that messy night of sleeping for some reason I didn't hear my alarm go off.  I woke up about 30 minutes before warm up and check in for the 1000.  I was smart enough to have all my stuff ready for this am so I grabbed a few things and was out the door.

At the pool the sun was coming out.  It was going to be a beautiful day.  I got in the lane with a mate of mine and started the warm up.  I did a 500 swim followed by 4x100's that were 50 drill / 50 swim.  I wanted to do some pace 100's but I kept catching up to by now 2 other mates.  So I alternated doing some 75's and 50's.  I then headed to the locker room to get out of my Splish Pink Polka Dot swim suit and put on my gown.  By gown I mean my Blueseventy swim suit.  This will be it's last race.  After putting it on I jumped in the pool to do a few laps.  After a bit of readjusting to make it comfortable I got out of the pool. 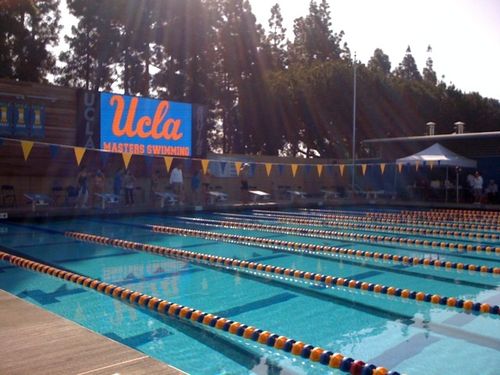 Since I sandbagged my time I was up pretty quick.  Well then again they only had 5 heats of it.  But I was heat 3 when I should have been at least heat 4.  I've learned that in swimming my distance events to swim my own race.  Not to look around and swim off others.  Mainly because in local meets the times can vary widely in heats.

So I got in the pool and felt I had to good start.  Swam a comfortable 100 but I did let a bit of that were is everyone compared to me.  Felt that way for the first 300 or so.  As I was lapping people I kept thinking I might be going to fast.  Which looking at my splits brings me to think I took it out too slow.  I have actually swam faster splits in the 1650.  Not good. 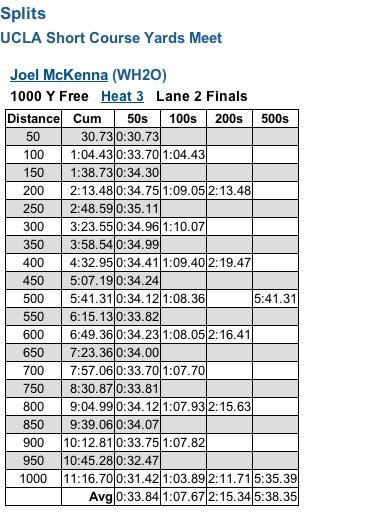 Of course I will admit that the 1650 was at Nationals when I was tapered, shaved down and excited about swimming.  Compared with today just swimming to swim it.  11:16.70 isn't so slow so I am happy for that time.  I've never swam the 1,000 before.  I was shocked to find that out when I was looking up my times to enter the race.  So it's a personal best.  And that is all that counts.

The splits above and the graph below are from swimphone.com.  Since I won't be swimming at Nationals this  year this will most likely be my only SCY Meet this year.  At least this gives me a goal for 2011.  Although I am leaning on going to IGLA in Hawaii instead of Nationals.  But it's all in the air for now. 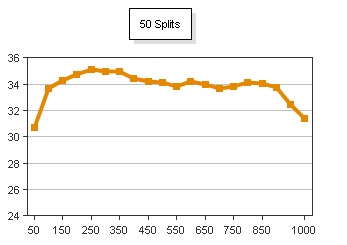 LATE BREAKING:  okay, well that is a hyperbole if I ever heard one.  So I keep thinking about this over and over again.  And have chatted, im and talked about this race to the n'th degree.  Yeah, it's only been a few hours but it's me.  I keep thinking about should I have created a sign language to my counter before the race?  Should I have a dedicated counter for these races.  I've actually pretty much only had 2 counters in the past.  I have had a few others but they always turn out to be non-pace keeping lap counters.  But when it boils down to it I only have myself to blame.  I should have been doing more distance workouts and pace sets.  Even if it meant swimming on my own.  In the past I did that and it worked.  I was swimming pace long course workouts with a few mates.  So as my Short Course damn yankee Yards season is over I need to think about LCM and SCM and what my training will be like.  Or maybe no training will be like.