Monday's Swim Report - "In your face, Patty and Selma" Edition

1.  Gamesbids.com reveals that the 2012 Mascot has been previewed to the IOC.  The article quotes one official who says "you are going to love it".  Hmm…I doubt it.  Will it 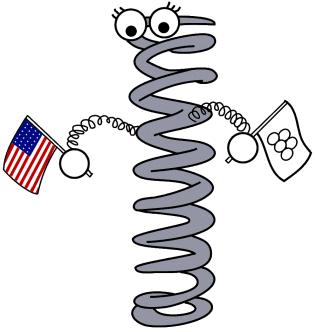 be another Whatzit?  Maybe Springy!  As one IOC Officer said "People, people, please!  You're forgetting what the Olympics are all about: giving out medals of beautiful gold, so-so silver and shameful bronze. " - The Simpsons

3.  Sweat Science looks at sports drinks and claims "Sports drinks don’t help for one-hour exercise (unless you’ve been fasting".  Now I am not saying I agree 100% with the article but I hate the trend of parents giving kids "sports drinks" thinking they are better then soda.  They are not!  Damn it!  This is why your kids are fat!

5.  He is.  He isn't.  Over the weekend rumors started to grow over the internet about Ian Thorpe returning to swimming.  Well guess what? He isn't.  Both the Herald Sun and BigPondSport report that Thorpe has said “I have no intention of returning to competitive swimming.”

6.  Gold Medal Mel has a Gold Medal Minute with Eric Shanteau.  He also links to a Time Magazine article written by Shanteau.

7.  Check it out!  You can be fashion victim in the pool with your official Rob Aquatics Swim Suit now 8.  The Swimming Workout Wizard has a killer butterfly set.  60x50's!  Okay so it does include a few easy free swims but it's a killer set!

9.  Swimming World reports that "Mike Troy had a gold medal from the 1960 Olympics Games stolen recently."  What are people thinking when they steal a medal?  It's not like you can put it up on e-bay without anyone noticing making it worthless.  Well it's not worthless but has no monetary value to the thief.

10.  In OMG NEWS…Kast-A-Way looks at "First Ever LEGOLAND® Water Park Will Include Build-A-Raft River".  I wanna go!