I started using Nike+ in January of 2007 on an iPod Nano and then eventually on my Nike+ Sportband and have logged in a total of 1179.15 miles in that time.  So to say I'm a fan of Nike+ is putting it lightly.  I LOVE MY NIKE+!  But like anyone who has ever used Nike+ I have issues with it.  Mostly it only works with Nike+ shoes.  Years ago I started running with Puma sneakers and had improvised my own little Nike+ pocket which didn't last and I lost a sensor.  I got a replacement and when it was time for new sneakers I got Nike+ sneakers.  Two sneakers later and I switched to Asics using a pouch I bought online to carry the Nike+ sensor.  Well starting today iPhone 3GS and 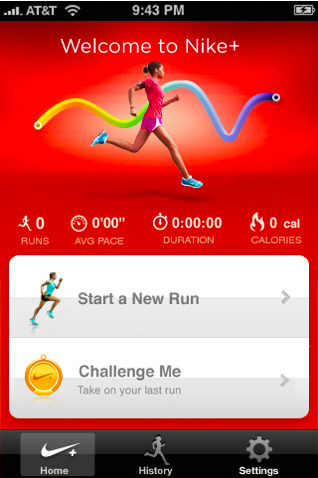 4G owners can ditch the Nike+ Sensor and use Nike+ GPS.

For $1.99 owners of iPhone 3Gs and 4G owners can download Nike+ GPS on iTunes.  Since I own a 3G model that has been smashed to bits and is unusable I cannot write a review so I'll leave it to the folks over at Cult of Mac:

Nike has released its Nike+ GPS app in to the App Store this morning, and it allows users with a GPS enabled device to track their runs without the $19 Nike+ shoe sensor accessory. Record your pace, distance and the route you ran using just your device’s built-in GPS and accelerometer.

It’s a $1.99 app and it does a whole lot of impressive stuff: motivational messages from Nike’s top athletes aim to push you further to improve your workout and reach your goals, while your personalized ‘PowerSong’ is designed to give you that extra boost.

Voice feedback as you run to tells you how you’re doing and when you’ve finished, you can upload your stats to your Nikeplus.com account (free) to compete with friends, join challenges, set goals and connect with the rest of the Nike+ community. 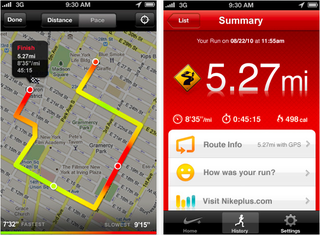 As soon as I can afford to buy a refurbished 4G iPhone the first app that I will download will be teh Nike+ GPS.  Like I've said in many post the Nike+ system keeps me motivated to run with challenges.  I've challenged many a friend to various running challenges over the years and this really makes me motivated to get out and run even if it means just hoping on a treadmill for 30 minutes.  Plus I like how Nike+ is linked to Facebook and Twitter so I can brag about my runs.  Nike+ GPS brings Nike+ to those who for one reason or another just don't wear Nike sneakers.

The app will allow runners to visually map and track every run, indoor and outdoor, “free range” or treadmill. Nike says the app even works when a GPS signal is unavailable. Mapped routes show a breakdown of the runner’s pace at various points during the run, as well. You can track your distance, time and number of calories burned.

One interesting aspect of the app is the “Challenge Me” feature. It helps runners challenge themselves to run greater distances, longer times or quicker paces than their previous runs. Aside from giving challenges, the app also provides in-run, on-demand motivational messages from pro athletes and celebrities.

very nice site loving article good color your site i like this blog.

Yeah but what about the $19 I dropped on the damn sensor? Couldn't Nike at least use it for cadence and use the GPS for speed? Argh