1.  The Charlotte Observer report "Phelps back for 3rd straight year
The 14-time Olympic gold medalist will headline competition that begins Thursday.  The Charlotte UltraSwim - one of the biggest and most prestigious swim meets in the United States - returns for four days of competition starting Thursday at the Mecklenburg County Aquatic Center in uptown Charlotte."

3.  From USA Today (w/ video) "At 16, swimmer Missy Franklin is rapidly rising through elite ranks.  Missy Franklin, who turned 16 Tuesday, leads Michael Phelps — and everyone else in the swimming world, for that matter — in this season's Grand Prix standings."

4.  Fox Sports reports "London Olympics boss Sebastian Coe wants a touch of Sydney and Ian Thorpe's magic in 2012. London Olympics boss Sebastian Coe wants a little bit of the party atmosphere from Sydney and a lot of the Ian Thorpe magic at his 2012 Games.  The Sydney Olympics remains the mark against which all sporting events are measured and London was hoping to emulate or surpass the 2000 Games, Lord Coe told a post-budget breakfast at Parliament House in Canberra on Wednesday."

5.  Skynews reports "Touretski keeps mum on Thorpe.  Ian Thorpe's coach Gennadi Touretski is remaining tight-lipped about the five-time Olympic Champion's progress in the lead-up to the 2012 London Olympics."  Love how the reporter manages to mention Thorpe's Armani suit from the Royal Wedding!

stretch for the many Pilates Mat exercises that require forward flexion.

* Lie on your stomach with the legs straight and together.

* Keeping your shoulder blades settled in your back and your shoulders away from your ears, stretch your arms straight overhead.

* Pull your abs in so that you lift your bellybutton up away from the floor.

* Reaching out from center, extend your arms and legs so far in opposite directions that they naturally come up off the floor. At the same time, get so much length in your spine that your head moves up off the mat as an extension of the reach of your spine. Keep your face down toward the mat; don't crease your neck.

* Continue to reach your arms and legs out very long from your center as you alternate right arm/left leg, then left arm/right leg, pumping them up and down in small pulses.

Uh…isn't that just the Superman?  Meh, I'll try it later.

7.  Active.com has a video of "Swimmer's Guide to the Perfect Pushoff.  A good pushoff is essential to establish your speed while training in the pool. Here's a step-by-step breakdown of the skills you need to obtain and sustain your momentum."

8.  Go Swim has "Preserving Olympic Principles: The 1980 Moscow Games.  I was recently 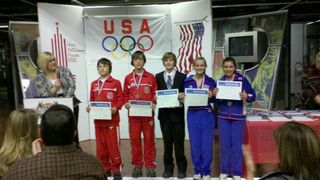 involved in an interview process with a group of students from La Mesa, California.  They were putting together a presentation based on the 1980 Olympic Boycott for the National History Day Competition.  I got word a few days ago, that not only did they do well, they've made the finals to be held in College Park Maryland.  Because of the travel expenses, the team is looking for contributions to help offset the cost.  Please download the Donation Request Letter and support this great group of students."

9.  This is Derbyshire posts "Swimmer strips for cheeky photo shoot.  Champion swimmer Ross Davenport is among a number of male celebrities to have posed nude in this month's Cosmopolitan magazine to raise awareness of testicular and prostate cancer."

10.  For you open water shark swimmers from io9 "How do you measure free-roaming sharks without being bitten?"