Lane 1 - Yahoo News reports "Swimming - Checking supplements is athletes' responsbility - FINA.  Swimming's governing body FINA has insisted athletes are responsible for monitoring their own dietary supplements as it prepares to appeal a decision by Brazil not to sanction four swimmers who tested positive for a banned substance." 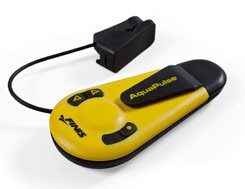 Phelps fervor.  FINIS, a world leader in technical swimming products that maximize your fitness potential and technique, announces the immediate availability of the AquaPulse™ Heart Rate Monitor, an audible heart rate monitor for swimmers and water fitness enthusiasts. The AquaPulse™ Heart Rate Monitor is a small workout accessory built for swimmers looking to get the most out of their workout through heart rate training."  The Aquapulse is priced at $149.99 at Finisinc.com.

Lane 3 - Check out some eye candy over at Gawker with "Totally Gratuitous Shots of Celebrities in Their Swimsuits."

Lane 4 - Yahoo Sports has "Jessica Hardy of the US attends an early morning training session at the Gold Coast Aquatic Centre in Brisbane on July 15, 2011. The US swimming team are in a training camp on the Gold Coast in preparation for the 2011 FINA World Championships in Shanghai from July 16."  Look at those blocks!  What are those handle thingies?  First the 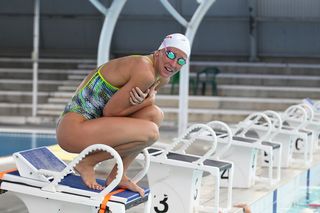 Lane 5 - Gizmodo looks at "See Like a Shark With These Fish Scale Goggles.  While they don't come with gills, these goggles are good enough for any trip to the beach. Because they're made out of actual fish scales. Unique! Designed by Erik de Laurens, they're part of a project he calls Fish Feast."

Lane 7 - GayGamer.net reports "Speedo Sponsors The Michael Phelps Swimming Game.  Speedo is synonymous with swimming and the inclusion of the Speedo brand in-game brings further realism to the game. As one of Michael Phelps' long standing partners, we are delighted to have them as part of this, commented Ian Howe, President, 505 Games, North America."

Lane 8 - Gawker posts "Tea Party vs. Manatees: It’s On.  Boaters in Kings Bay, which was featured in Jacques Cousteau's manatee documentary Forgotten Mermaids, have killed 13 manatees over the last decade with their aquatic death machines. The Fish and Wildlife Service is trying to pass permanent rules protecting Kings Bay as a refuge…Edna Mattos, 63, leader of the Citrus County Tea Party Patriots, in an interview 'If some of these environmental movements had been around in the days of the dinosaurs, we'd be living in Jurassic Park now.'"  Huh, what?