Lane 1 - I am just loving the beach ware fashion of 1965 "Natalie Wood Paul Newman Jane Powell Malibu 1965. Silent home movies given to me personally by Roddy McDowall." via youtube

Lane 2 - Bleacher Report posts (slideshow) "USA's Top 5 Male Swimmers with Shots at Multiple Golds.  The US men's swim team was the dominant pool force at the Beijing Olympics, raking in 31 medals and 12 golds.  So this year, team USA will see many young, ambitious swimmers come up through the ranks and compete for medals. This makes predictions much more interesting than in other previous years because there is a lot more competition for open spots.  That being said, these are my predictions for top five USA Men's Olympic swimmers most likely to win multiple golds."

Lane 4 - WOWT has "Olympic Dream For An Omaha Swimmer.  He's heard the word *no* so many times, he doesn't even listen.  Brandon Vander Horst understands the doubters because his goal is beyond ambitious, to swim in the Olympic Trials here in Omaha next summer. He only took up the sport two years ago.  Go to Lifetime Fitness where Brandon works out and chances are you'll see him in the pool. The three hour workouts begin at 6:30 in the morning and he's back at it again later in the afternoon."

Lane 5 - The Star has "'McCabe Olympics' stepping stone for swimmer.  They called it the 'McCabe Olympics.'  And you’re excused if you never have heard of it. Luckily, the International Olympic Committee didn’t either, or they’d have sued for copyright infringement.  But in Toronto swimmer Martha McCabe’s family, this was a big deal.  McCabe had a breakout performance at the FINA world aquatic championships last month, winning a surprise bronze medal in the women’s 200-metre breaststroke.  The Leaside High School grad clearly is not taking her newfound status for granted heading toward the 2012 London Olympics." 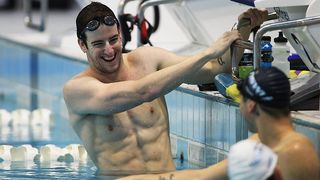 coach Brant Best. AMES Magnussen is our first 100m world freestyle champion since Michael Wenden. Mike Hurst asks his coach Brant Best how he did it.  BRANT BEST, 39, NSWIS elite swimming coach, is best known for having coached James Magnussen to win the 100m freestyle gold medal and set up victory over the USA in the 4x100 Freestyle Relay at the FINA world swimming championships in Shanghai, China in 2011."

Lane 7 - Card Player has "Interview With Jeff Gross, Roommate Of Olympian Michael Phelps.  Gross Talks About His Live Tournament Success.  Jeff Gross is a 24-year-old poker pro with a lot going for him. Before Black Friday, he was a successful online tournament grinder playing under the name “kidwhowon.” Post Black Friday, he’s a budding live tournament star 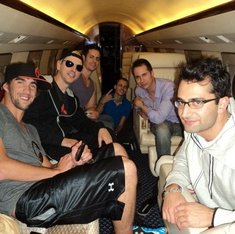 with 14-time Olympic gold medal winner Michael Phelps in his corner.  The two are friends and roommates, and both are masters of their particular craft."

Lane 8 - Sky News reports on "Wild swimming is latest craze.  Swimming in rivers and lakes is the latest craze for people who want to exercise without joining a health club.  So-called wild swimming groups say their membership is booming despite the UK's unreliable weather and chilly open water.  Comedian David Walliams is being given some of the credit for the increased popularity of the sport - after swimming the channel for charity five years ago and swimming the entire length of the Thames.  Swimming outdoors became unfashionable after the Second World War - all but killed off by cheap travel and a burgeoning health and safety culture.  Its revival is being helped by social networking sites that make it easy to arrange meetings and promote suitable stretches of water around the country."

Posted at 11:29 AM in In Swimming News, Michael Phelps, Olympics, Other Swim Stuff, Speedo, Worked Out Celebs, You Tube Videos | Permalink | Comments (0)