Lane 1 - Alligator posts "Swimmer arrested Monday on cocaine possession charge.  Former Gators swimmer Lily Ramirez, 21, was arrested Monday night for cocaine possession and resisting an officer without violence at the Alachua County Fair Grounds.  The drug charge is a third-degree felony and the latter is a first-degree misdemeanor.  It is Ramirez’s second arrest since February, and it cost her any future she had with the Gators’ swimming and diving team." 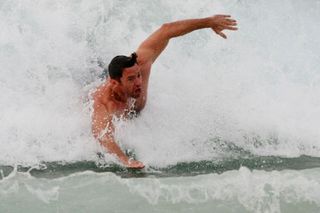 Lane 2 - StarPulse posts "A Jacked Hugh Jackman Swimming In Sydney.  We spotted a very fit Hugh Jackman going for a swim in the ocean at Sydney's famous Bondi Beach after an early morning training session yesterday."

Lane 3 - Swimming World posts "Third Annual Rowdy Gaines Classic To Feature Olympic Medalists, SwimmingWorld.TV To Interview Top Swimmers.  THIS year's Rowdy Gaines Classic will be held at the YMCA Aquatic Center in Orlando, Fla., from Oct. 14-16. Besides featuring the eponymous Olympic legend racing in the short course meters meet and hosting and a free swimming clinic, this year will also bring back a few Olympians to competitive swimming.  On his Facebook page recently, Gaines announced that 1988 Olympians Tracey McFarlane (silver, 400 medley relay) and Mitzi Kremer (bronze, 400 free relay) will be racing in their first Masters competitions. Also, two-time Olympic diver Mark Ruiz will step up to the starting block instead of the diving board to compete in a couple of races.  Olympic champion Martin Zubero (200 back, 1992) is also on the list of competitors. Zubero is no stranger to Masters swimming. He is a former USMS national record holder in the individual medley and backstroke events.  SwimmingWorld.TV's Jeff Commings will attend the meet to conduct interviews with top swimmers and participate in the swimming clinic as he prepares to compete in the U.S. Olympic Trials."  I will also be swimming at this event but will be struggling just to finish the 200 butterfly.

Lane 4 - Asahi posts "Kitajima overcame self-doubt to get back on podium.  During a period of painful self-reflection this summer, Olympic swimming gold-medalist Kosuke Kitajima found himself staring into the abyss. The valuable lessons he learned at the World Championships in July, however, might just help get him one step closer to Olympic gold at his third consecutive Games.  At the World Championships in Shanghai, Kitajima almost gave up on himself."

Lane 6 - SI has "Phelps kicks off Olympic training regimen, including time with Ohno.  It's still September, and Michael Phelps has already been training for six weeks.  He couldn't say that in any of the last three years since his record-setting Beijing Olympics. The 16-time medalist is swimming more yards per week now - 10 months before the London Games - than he ever did in the lead-up to this past summer's world championships."

Lane 7 - Goldcoast has "McEvoy to line up alongside Thorpe. CAMERON McEvoy's dreams of swimming against his idol were crushed when Ian Thorpe retired.  But the rising star of Australian sprint swimming will realise his goal after all when he lines up alongside Thorpe in his return World Cup meet."

Lane 8 - Arizona Daily Star posts "Ex-Cat Chandler already has the smile of winner.  A few days ago, a film crew from Indianapolis arrived at her house to get some video for the NCAA Woman of the Year award. Because Chandler will be at the Pan Am Games on the night of the ceremony, they asked if she would tape an acceptance speech in advance."