Lane 1 - The Spectrum has "Mother-daughter success in the pool.  Not too many weeks after St. George/Santa Clara educator Elaine Heger completes her competition in the swimming portion of the Huntsman World Senior Games, her daughter Leah Heger will take her place in the waters of the Sand Hollow Aquatic Center as a valued member of the Snow Canyon swim team." 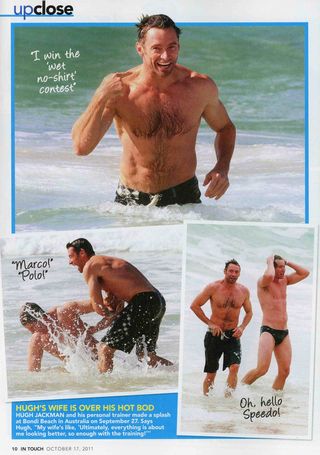 Lane 2 - "In Touch (October 17, 2011) treats us to these candid shots of Hugh Jackman frolicking in the surf with his Speedos-sporting personal trainer." via Boy Culture (NSFW site)

Lane 3 - Swimming.org posts "British swimmers target internationals on road to 2012.    Britain’s swimmers are preparing for action on the international circuit as they supplement their intense early season training with race preparation ahead of the Olympic year.  With eyes firmly focused on the British Gas Swimming Championships 2012 (Selection Trials) at the London Aquatics Centre in March, athletes have been working hard towards meeting the criteria for nomination to Team GB for the London 2012 Olympic Games."

Lane 5 - The Independent Florida Alligator posts "Gators swimming motivated by potential Olympic berths.  As the Florida men’s and women’s swimming teams prepare for the 2011-12 season, there will certainly be no shortage of motivation.  Aside from their usual goals within Southeastern Conference and NCAA competition, the 2012 Summer Olympic Games in London are fast approaching, and plenty of Florida swimmers hope to give themselves the opportunity to perform for their respective nations on the world stage."

Lane 6 - The West Australian posts "Like a fish to water in Subiaco.  It seems that 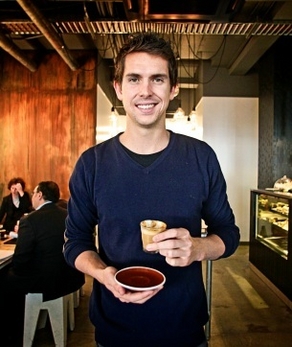 Olympic swimming hero and all-round nice guy Eamon Sullivan can do no wrong these days.  His new cafe in Subiaco, Louis Baxters, is going gangbusters and he has just released his first book - a cookbook called Eamon's Kitchen.  Oh, and he was crowned 2011 Cleo Bachelor of the Year in April."

Lane 7 - The Guardian posts "Sinking or swimming?  I was listening to the programme “Mixed Nuts” on Radio 105FM some Friday mornings ago, and was very pleasantly surprised to hear George Bovell III speaking as a guest on the show.  The conversation addressed the problem of the lack of popularity of swimming as a spectator sport and the difficulties of promoting it. The fact is that most spectators at swim meets are parents and maybe even a few friends. This is reflective of the youthful population made up of kids and adolescents involved in swimming. But what of the longevity of the athletes? Why do we not have more adult swim meets? The answer is as simple as the fact that we have very few adult swimmers who choose to compete. Those who are good enough to make it to international competition are lost to scholarships and greater opportunity in foreign countries."