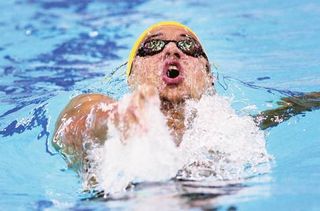 South African kept it in superb fashion, adding three more gold medals to his collection for an amazing six golds at the end of two days of swimming at the Hamdan Bin Mohammad Sports Complex here last night."

Lane 4 - Florida Gulf Coast Eagles post "FGCU women’s swimming & diving team continues its 2011-12 campaign at the All-Florida Invitational, beginning on Friday at the Stephen C. O'Connell Center in Gainesville.  Hosted by the Florida Gators, who finished seventh at the NCAA national championships, the meet showcases the state's best collegiate talent and will provide an early barometer of where the teams match up. Florida State, Florida A&M, FAU and Miami highlight the seven-team field of in-state schools."

Lane 5 - Westfair Online has "Business owner doubles as top-five swimmer.  For Roger Kahn, a resident of New Rochelle and owner of a Long Island-based virtual office firm, balancing his work and his passion for swimming comes naturally – no small feat when considering his family obligations, which he says come first.  But to merely call swimming a passion would be shortchanging Kahn, 56, who recently competed at the U.S. Masters National Swimming Championships in August and is ranked among the top five swimmers in the nation in the 55 to 59 age group."

Lane 6 - Sharpie has "Michael Phelps Inks it Pink with Sharpie for City of Hope.  Olympic medalist and world champion swimmer, Michael Phelps, joins Sharpie for the second year to show his support for Breast Cancer Awareness Month and City of Hope by committing to Ink it Pink this October!  Join Michael and upload your "Pinked out" John Hancock to sharpie.com!" via youtube

Lane 7 - LA Times reports "Janet Evans churns toward 2012 London Olympics.  At 40, the swimmer who won gold at the 1988 Seoul and 1992 Barcelona Games is enjoying her longshot bid."

Lane 8 - Boston Herald posts "Unseen sharks still lurking off Cape Cod.  Nobody’s seen or heard of any great white sharks in weeks, but experts think the massive predators are still here in the waters off Chatham.  Chatham Harbormaster Stuart Smith said Friday the only possible shark-related activity was the recent report of two seals on South Beach that looked as if they had been attacked. South Beach is the barrier beach now connected to the mainland that stretches south of Lighthouse Beach."