Sunday's Swim Report - PSA: Not Everyone Should Run In A Speedo

Lane 1 - Boston.com asks "Should boys be allowed to swim on girls' teams?Should boys be allowed to swim on girls' teams?  What happens when a high school boy breaks a girls’ swimming record?  The governing body that regulates high school athletics in Massachusetts plans to grapple with that question, as more boys are competing on girls’ swim teams in the fall season than ever before.  According to MIAA spokesman Paul Wetzel, one issue is not up for debate. There’s no stopping boys from competing on girls’ swim teams.  Under state laws requiring equal 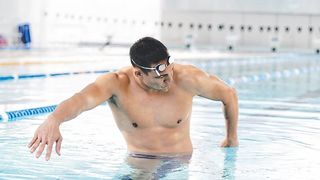 access to sports for both genders, if there is no boys’ swimming program at a male athlete’s high school, he can swim for the school’s girls’ team."

Lane 2 - Adelaide Now has "Swim tips with Geoff Huegill.  SWIMMING champ Geoff Huegill explains how to improve your technique and endurance in the pool.  According to Commonwealth Games medallist Geoff Huegill, everyone has the potential to swim well. “It’s not overly complicated, for one thing, and because it’s not load-bearing, people who have had injuries can do it too,” Huegill, an ambassador for Biotherm, says."

Lane 3 - CBS the early show posts "Bikini-clad women skip cage to swim with sharks.  Swimming with sharks may be a nightmare for some, but it's a plan for a team of five swimmers in Durban, South Africa.  And what's more? They plan to do their 24-hour swim with sharks in the ocean without the protection of a cage, starting tonight.  They're doing it in the name of science." 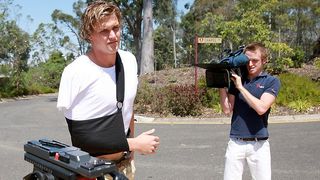 Olympic swimmer Kenrick Monk has escaped a possible three-year jail term, with police top brass not charging him despite the fury of frontline officers.  The Queensland Police Union has labelled 23-year-old Monk a "wannabe B-grade celebrity athlete" protected by "Swimming Australia's faceless backroom club" after he avoided charges.  The Commonwealth Games swimmer was fined by Swimming Australia and has received a letter from Queensland Police reprimanding him for his actions."

Lane 5 - The Australian posts "Klim makes strong comeback in 100m freestyle.  DESPITE a timing malfunction on his race, Olympic gold medallist Michael Klim has made an excellent start to his competition comeback, swimming the 100m freestyle in under 50 seconds in his first race in more than four years.  Klim, 34, swam a 100m time trial as part of a 200m freestyle race at a Victorian qualifying meet at the Melbourne Sports and Aquatic Centre this morning, but the clock did not register when he touched the timing pad with his hand at the 100m mark, only stopping when he leaned on the pad after 51.03sec."

Lane 6 - Another reason to get one of those mp3swim things via SwimNews.com "Pellerin's Crew Tunes In To Water Music. French coach Fabrice Pellerin has kitted out his squad, including Yannick Agnel and Camille Muffat, with waterproof mp3 players loaded with

the sounds of Hans Zimmer's Dark Knight (Batman), Vivaldi's Four Seasons, Love the Way You Lie with Eminem and Rihanna, the Beatles and Mozart."

Lane 7 - WISTV has "Speedo-clad Santas run for breast cancer. Hundreds of people stripped down in Pennsylvania Nov. 29 for the third annual Santa Speedo Run to benefit breast cancer research."  WNEP posts "Speedo Run for a Cause.  In Columbia County, it was quite a sight to see. More than a hundred people showed up in their swimsuits Saturday to help support an important cause in northeastern Pennsylvania.  It was the third annual Speedo Run, and runners said they love coming back each year."

Lane 8 - They should be swimming vampires!  Chicoer reviews teen lit book "Swim the Fly…There is a bit of romance and self-discovery as well. Matt has agreed to swim the 100-yard butterfly for his swim team because he wants to make his crush, Kelly West, notice him. Although Matt is physically unprepared for this challenge and describes himself as incredibly lazy; he attacks his goal with a determination that he didn't know he had. Giving up is never an option, even when reaching his goal becomes next to impossible."