Lane 1 - More Than The Games has "Speedo strike first blow in Olympic swim suit battle.  TWO years after swimming's world governing body banned supersuits - after 43 world records were smashed at the World Championships in Rome - and Speedo have fired the gun in the battle for brand supremacy at next year's London 2012 Olympics.  Gone are the days when a 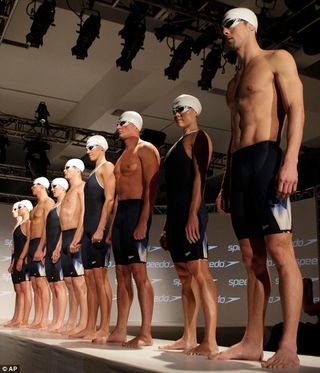 pair of trunks and goggles were all you needed, the appliance of science is now almost as important to swimming as it is to Formula One."

Lane 2 - The Telegraph has "Speedo hope 'revolutionary' Fastskin3 swim suit will see records tumble at London 2012 Olympics.  The battle lines for next summer's Olympic swimming competition will be drawn on Wednesday when Speedo unveils its new swimwear range, which it claims will revolutionise the sport. The brand has received Fina approval for their Fastskin3 concept which will be revealed when a shroud of secrecy is finally lifted in London tomorrow. "

Lane 4 - One more from The Telegraph with "New Speedo Fastskin3 swimwear: an amateur tests the 'system'.  Speedo's new Fastskin3 swimwear, which the manufacturer claims will "revolutionise the world of swimming once more" was unveiled today. But will it do anything for the amateur swimmer? "

Lane 5 - Mail Online posts "Hopefully it won't be banned this time: Speedo unveils Fastskin3 swimwear to replace controversial full-body suit.  Now London 2012 promises to be just as challenging for timekeepers, as Speedo's new Fastskin3 swimwear system claims it will make sportsmen and women even faster.The components all work together to streamline a swimmer's body.  Speedo claims that swimmers will gain an extra 11 per cent in oxygen economy by wearing the system - allowing them to swim stronger for longer.  It also reduces skin friction drag by 2.7 per cent and full body drag force by 5.7 per cent.  CGI 3D technology was used to produce a cap that exactly fits the contours of the head and face.  The flat, cat's-eye shaped goggles are the most visibly innovative part of the Fastskin3 system though, their shape minimises the chance of goggle movement during a race."

Lane 6- Mail Online asks "So you're not boycotting this swimsuit, then? Michael Phelps is joined by Natalie Coughlin to model new Speedo Fastskin3. Michael Phelps was bitterly opposed to Speedo's LZR Racer swimsuit, which was banned following controversy at the FINA World Championships in Rome in 2009.  But the 16-time Olympian clearly has fewer issues with the firm's latest effort, Fastskin3, which was launched today ahead of next year's Olympics in London.  Phelps, along with teammates Natalie Coughlin and Ryan Lohte modelled the latest collection at a presentation in New York."

Lane 7 - Yahoo Eurosport reports "Olympics-Phelps unveils new swim suit he will wear in London.  Michael Phelps, looking more like Spiderman than the world's fastest swimmer, unveiled the high-tech swimsuit he plans to wear at next year's London Olympics on Wednesday.  Flanked by some of his American team mates, including Ryan Lochte and Natalie Coughlin, Phelps strutted the catwalk in Manhattan to launch the latest range of skin-tight suits that the makers Speedo say will give their swimmers a massive edge over their rivals.  FINA-APPROVED - Bowman and Phelps were outspoken critics of the full-body polyurethane suits that reduced the 2009 world championships in Rome to farce and were later banned because they aided buoyancy.  But both said they were comfortable with the new suits, which Speedo said had been approved by the sport's world governing body FINA.  "I think the difference between this and what happened before is that we're giving them an edge but we're doing it in three ways: cap, suit and goggles," said Bowman."