Lane 1 - Daily Mail posts "Taking a dip: Prince Albert of Monaco swims in Mediterranean (but that's nothing compared to Siberian swimmer who wears only Speedos as 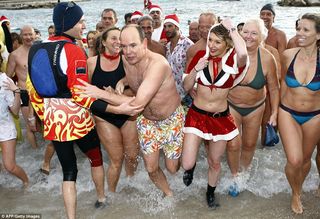 temperatures plummet to -20C)  His wife is a former Olympic swimmer who competed at the Sydney Games.  And it appears Charlene, Princess of Monaco's, enthusiasm for the sport has rubbed off on her husband Prince Albert."

Lane 2 - Herald Sun posts "Swim star Stephanie Rice forced to delay return to training.  TRIPLE Olympic champion Stephanie Rice has had a setback in her recovery from shoulder surgery with an infection forcing a delay in her return to training.  Rice's doctor ordered her to avoid training on Monday after she developed the infection following last week's arthroscopic surgery to repair a torn tendon in her right shoulder." 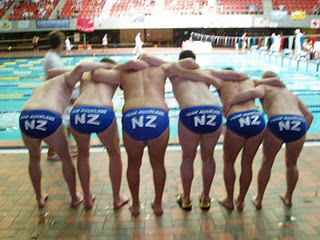 Lane 6 - Siliconera answers the question of the century "How Sonic Can Swim In The Mario And Sonic Olympic Games.  When Nintendo and Sega began work on Mario & Sonic at the Olympic Games​, both were tasked with supervising the depiction of their own characters in the game. Nintendo would keep an eye on how the game depicted Mario and crew, and Sega kept an eye on Sonic and friends. This naturally led to some differences in opinion, regarding what was and wasn’t acceptable within the game.  One of these topics was with regard to swimming. Not only did Sega ponder the subject of whether or not characters like Peach and Mario should have to wear swimwear, Nintendo themselves rejected the early costume designs for Peach and 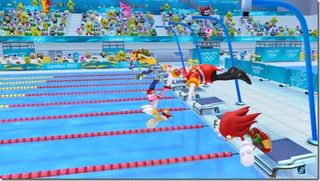 Daisy. Meanwhile, the supervisor in charge of the Sonic brand at Sega wouldn’t budge from the fact that Sonic isn’t supposed to be able to swim at all, let alone take part in an Olympic swimming event."

Lane 7 - USA Today "Brendan Hansen is beating his rivals, feeling less pressure.  Brendan Hansen left competitive swimming so he could do all the things he'd put on the backburner, like getting married.  His wife, Martha, a sixth-grade math teacher, quickly put two and two together when she saw the two-time Olympic breaststroker in the pool without any real purpose."