the17thman
Home Archives Profile Subscribe
When The Wheels Fall Off The Bus or When I Swim Breaststroke.
12 Days of Christmas For Swimmers! Day 9: The Inner Tube

Lane 1 - BBC Radio has (w/ audio) "The 'exhilaration' of wild swimming.  Throughout autumn and winter, people around the UK gather for coldwater swims, including on Christmas Day, Boxing Day and New Year's Day.  Author Susie Parr, who has written about "wild swimming" in the Story of Swimming and 74-year-old Georgina Rose from Clevedon talk about their passion for taking the icy plunge."

Lane 3 - USA Today has "Amanda Beard embraces roles of mom blogger, Olympian.  When Amanda Beard's husband suggested the name "Swim Like a Mom" for her blog, she hated it.  I feel like it's rude," the four-time Olympic swimmer told him. But Sacha Brown, a photographer who helps his wife with the blog, persisted. "He said, 'It's a positive thing. You're a mom, you swim fast,'" Beard said. "It's all in good fun."  Now they good-naturedly call the blog "SLAM" and Beard's Twitter followers have dubbed themselves 'Slammers.'" 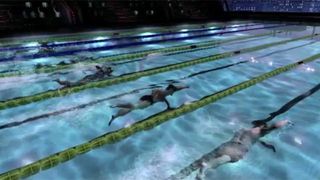 game consists of variations of strokes and course lengths. It feels like the title would have been better as cheap downloadable content or packaged in a larger Olympic sports world. At least keep with the swimming theme and give us diving as an option. "

Lane 5 - Port Macquarie News posts "Stephanie Rice to help Port swimmers.  PORT Macquarie swimmers are being encouraged by triple Olympic gold medallist Stephanie Rice to join her swim squad.  The program is aimed at sharing her secrets of success with young aspiring swimmers.  Rice’s swim squad is an online program designed to inspire our next generation of elite swimmers.  Swimmers from Port Macquarie under the age of 18 who want to learn from the Olympian are encouraged to complete the specially designed Steph’s Swim Squad application on the SunRiceFoods Facebook page."

Lane 6 - Stuff posts "Shark spotted near popular beach.  People have been cautioned to stay clear of part of Papamoa beach after a two-metre-long shark was spotted.  This morning's sighting came just days after a shark damaged a piece of sonar equipment being used to look for containers from the cargo ship Rena, grounded off the Tauranga coast."

Lane 7 - Sports Illustrated posts "Open-water swimmer looks to make name for himself in 2012.  With the Olympics right around the corner, most athletes have the Olympic trials at the 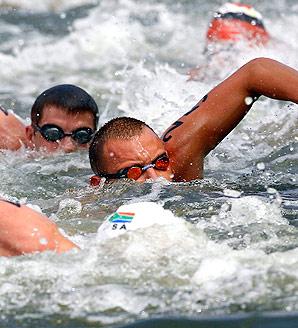 front of their mind.  But Alex Meyer is not like most athletes. The open-water swimmer is the first American swimmer to have qualified for the 2012 Games. While he is still training hard, Meyer, 23, can relax just a tiny bit, knowing that he will be representing the U.S. in London next summer."

Lane 8 - Wired.com posts "Study: New Swimsuit Aided Record-Setters at 2009 Championships.  Yes, the 2009 swimming world championships were just as devious as you suspected.  A study by Northwestern University has found that the 43 world records set at the event in Rome were accomplished primarily as a result of the participants’ swimsuits."