Monday's Swim Report - Sprinting Towards The Swim Up Bar!

the United States, Lin Dan of China, Emmanuel Ginobili of Argentina and Sir Chris Hoy of Great Britain. Each of these athletes will participate in activities to help inspire and encourage future generations to achieve greatness through great starts in athletics -- and in life."

Lane 2  - The Sun posts "Winning gold in London is my dream.  WHEN Rebecca Adlington became the first British swimmer in 100 years to win two gold medals at the Olympics, even her gran questioned why she would want to carry on in the pool.  The answer was simple — the prospect of competing at London 2012."

Lane 4 - Gizmodo has "Waterproof Android Phones and Tablets Are Swimmingly Cool.  Everything should be waterproof. Especially phones, because you know how you love to poop and talk. You can thankfully drop Fujitsu's new line of waterproof Android phones and tablets in the crapper without ruining them." 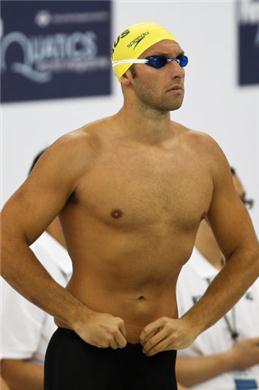 prepares for the 2012 London Olympic Trials.  The 29-year-old Thorpe, who returned to competitive swimming on February 1, 2011, has been putting a lot of effort in his training program to make his  comeback successful.  urrently, the comeback king is preparing to race in the 100m and 200m freestyle at the Victorian Open Championships, which are scheduled in Melbourne from January 13 to 15. This will be Thorpe’s first appearance at the national stage in last six years."

Lane 6 - The Sydney Morning Herald posts "Shark sighting was 'fourth in a week'.  A shark sighting at a Sydney beach shortly after Opposition Leader Tony Abbott got out of the surf is the fourth in the last week, lifeguards say.  Beachgoers were ordered out of the water at Manly after a surfer spotted a shark off the Corso about 10am (AEDT)."

Lane 7 - The Toronto Sun posts "Top 10 hotel swim-up bars.  Beat the heat while enjoying your favourite drink at one of these top resorts' swim-up bars, as chosen by editors and users of travel review leader."

Lane 8 - The Race Club has "Interview - Ryan Cochrane and Randy Bennett.  Randy Bennet is the Canadian Head Coach for the 2012 Olympics. Ryan Cochrane looks to be the only challenger to current world record holder Sun Yang of China heading into the London Olympics. Check out this interview that includes footage of Ryan's amazing technique." via youtube.