Lane 1 - Shape.com posts "What Dara Torres Eats (Almost) Every Day.  Greek Yogurt
This delicious yogurt is a staple in Dara Torres' diet. Creamy, low-fat. and versatile, Greek yogurt is great for breakfast, a snack, or lunch. Looking for ways to get more Greek yogurt? Cheese "I love cheese!" Torres says. "I always have it in the fridge."  Applesauce  Torres keeps the fridge stocked with applesauce for her 5-year-old daughter Tessa, who she says loves it…"

Lane 3 - Namibia Sport posts "US swimming star in Namibia.  Seven time Olympic medallist and former American swimmer Aaron Peirsol will be in Namibia at the invitation of the Namibian Swimming Union (NASU).  Peirsol will give a motivational speech at an event where former South African Olympic champion, Ryk Neethling will also speak." 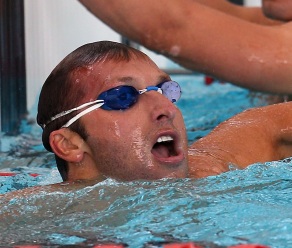 Lane 4 - The West Australian posts "Thorpe not drowning, just warming up.  Australian head swimming coach Leigh Nugent has backed Ian Thorpe to lift for the occasion by swimming significantly faster at the Olympic trials in March than he has so far in his modest comeback.  Five-times Olympic Games gold medallist Thorpe's bid to make the team for London seemed doomed when he failed to make the final of the 100m freestyle at last week's Victorian State championships.  The 29-year-old went on to restore hopes in the 200m freestyle, finishing fifth in the final, and looked much closer to the Thorpe of old, settling into a comfortable rhythm in the four-lap race in which he once held the world record." 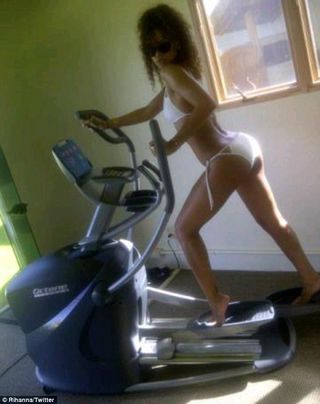 “Lifesaver of the Year” award to be given by the National Drowning Prevention Alliance and USA Swimming Foundation. Ten finalists were selected after a two-month submission period that began in October.  The ten finalists represent a broad cross section of the country, including the states of New Jersey, Pennsylvania, Rhode Island, Maryland, Michigan, Oklahoma and Florida."

Lane 6 - Mail Online posts "That's not your normal workout gear! Rihanna hits the cross trainer... wearing just a TINY white bikini.  Most people dress down when they hit the gym, wearing loose tracksuit bottoms and T-shirt to be the most comfortable while exercising.  But Rihanna opted for something slightly more daring in Hawaii yesterday, sharing a picture of herself on her Twitter page wearing just a tiny white bikini as she posed on a cross trainer.  The 23-year-old singer teamed the triangle two-piece with a pair of huge sunglasses, and tweeted the shot with the caption: Haha, come tap this @Khloekardashian!!!'"

Lane 8 - WaPo posts "Shark bites swimmer’s arm at Australian beach; nation’s 3rd shark attack in less than 3 weeks.  A 10-foot (3-meter) tiger shark has attacked a swimmer off a remote beach in Australia’s third attack this month. That’s as many attacks as the country generally sees in an entire year.  Western Australia Police Sgt. Gerry Cassidy says the man was swimming in a lagoon at Western Australia’s Coral Bay on Thursday when the shark bit the man’s arm. The attack left the swimmer with severe lacerations."

Posted at 09:43 AM in Ian Thorpe, In Swimming News, Olympics, Other Swim Stuff, Shark Week, Worked Out Celebs, You Tube Videos | Permalink | Comments (0)