Lane 1 - Contact Music posts "Scott Speedman - Scott Speedman Turns His Back On Swimming.  Underworld star Scott Speedman has hung up his Speedo and turned his back on his swimming obsession - because he was bored of the daily lengths he had to do in the pool.  The Canadian star was a youth distance freestyle champion and at one point considered becoming an Olympian, but an accident ended his dream." 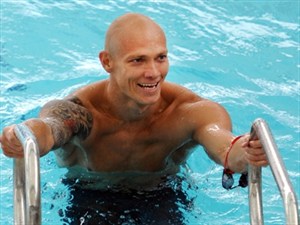 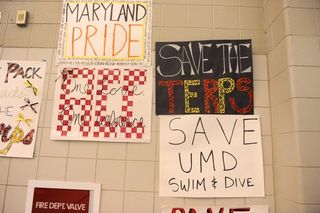 Lane 5 - WaPo has "University of Maryland swimmers struggle to save their program from elimination.  Signs hang on the pool wall showing support for the Maryland men’s and women’s swim and dive programs that are slated to be cut.  At first, all Megan Lafferty wanted to do was lie on her bed in the dark. Like all of her teammates, she was devastated when Maryland Athletic Director Kevin Anderson informed them last November that the university planned to drop its men’s and women’s swimming and diving teams."  Meanwhile Silver Chips Online posts "For UMD, cutting their sports can only lead to losses.  Cutting varsity sports teams is an unfair solution to Maryland’s budget shortfall."

Lane 6 -  ESPN posts "Chloe Sutton chooses pool over open water.  Chloe Sutton turned 20 this week with a unique goal in sight. If all goes well for the next few months, she could become the first U.S. swimmer to have made Olympic teams in both open water and pool events.  Sutton, who swims for the Mission Viejo (Calif.) Nadadores club, blazed onto the open water scene at age 14 and over the next two years would win gold in the 10K at the Pan American and Pan Pacific Games and a bronze medal in the 5K at the 2008 World Championships. Sutton was the only U.S. woman to compete in the 10K race in Beijing in 2008, the first year the grueling discipline of open water was included in the Summer Games, and finished 22nd." 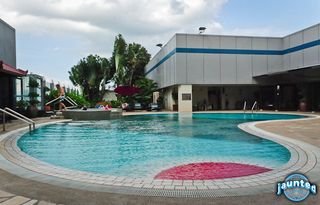 Lane 7 - Jaunted posts "Hanging Out at Singapore's Changi Airport: The Outdoor Pool. Yes, a Pool. There's a reason Singapore-Changi International Airport consistently wins awards; it's because the place is ah-may-zing. After spending much time at the three main terminals earlier this week, we're sharing with you our favorite, can't-miss bits of this massive travel hub.  Today: The famous pool atop Changi Airport's Terminal 1  Look, you have to believe us when we say that one of the terminals at Changi Airport has a swimming pool. Why? Because, crazily enough, it's true. You'll find the clear blue waters of the outdoor pool above Terminal 1, just follow the "swimming pool" signs and an escalator to reach it."

Lane 8 - Dread Central posts "2-Headed Shark Attack.  1 Body, 2 Heads and 6,000 Teeth declares the tagline.  More like 2 heads, many boobs and no brains.  2-Headed Shark Attack is a total Joe Bob Briggs kind of movie, if you know what that means. It’s more Piranha 3D than Mega Shark vs., more in the vein of a drive-in b-movie of the past than a Syfy original movie of today. Blood, boobs, and beast are the three b-movie fundamentals, and there is no shortage of all three b’s in this one."

Posted at 10:39 AM in In Swimming News, Olympics, Other Swim Stuff, Worked Out Celebs | Permalink | Comments (0)