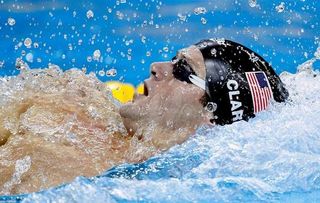 Lane 2 - Omaha.com posts "Californian hoping past close shaves pay off.  Tyler Clary is one of the best swimmers in America you've never heard of. And when you learn who his main competition has been, you'll see why.  During the 2008 Olympic swimming trials in Omaha, Clary placed just out of Olympic bids in both the 400 individual medley and 200 backstroke. In the back, he lost to Aaron Peirsol, who may well be the best swimmer ever in that stroke, and Ryan Lochte, arguably the fastest swimmer in the world today. In the IM, the guys who grabbed the Olympic spots were Lochte and a guy named Michael Phelps."

Lane 3 - Reuters posts "Swimming-Olympic hopeful Trickett shows she's no 'fraud'.  Libby Trickett's quest to compete at a third Olympic Games received a major boost on Friday when the Australian swam her fastest time since coming out of retirement, a performance that made her feel less like a "fraud".  The three-times Olympic and eight-times world champion retired in late 2009 before returning to competition last June but has been struggling to post competitive times since."

Lane 8 - Yahoo posts "AP Enterprise: US Olympic’s London gym nearly done.  Think of it as “Colorado Springs East”—a training spot for U.S. Olympians in London.  A sparkling new 21 million-pound ($33.2 million) gym at the University of East London is just about complete and will host the U.S. Olympic team during the games. In a few weeks, it will be ready for everyone from stars like swimming’s Michael Phelps and basketball’s Kobe Bryant to U.S. athletes who are still relatively unknown, offering them privacy to lift, stretch and practice."