Tuesday's Swim Report - Are You Faster Then A 12 Year Old? 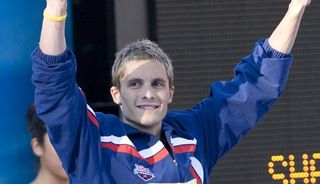 Lane 1 - Fox Sports posts (w/video) "Life since Beijing renewed Shanteau's focus.  Since Beijing, Eric Shanteau has undergone surgery for his condition, been declared cancer free, lost his father to lung cancer, and found renewed focus for swimming and Olympic goals. On the recent Saturday, Shanteau looked ahead as competition at the Missouri Grand Prix continued in a pool nearby. He thought about how challenges of the recent past had shaped him. Since China, he had undergone surgery for his condition, lost his father, Richard, to lung cancer and developed a renewed focus for his sport with a goal of representing the United States in London."

Lane 2 - The Telegraph posts "Skippy Geoff Huegill finds charity swim a real drag.  IF swimmer Geoff Huegill thought losing 45kg for his comeback was tough, yesterday's challenge really put him to the test.  Huegill barely survived a 50m charity swim - while wearing jeans, a dress, a trenchcoat and leather shoes.  The man they call Skippy was racing against 12-year-old Maddy Harley, who was swimming for her good friend Julz Free who suffers from cystic fibrosis.  The race - which Maddy won - helped raise money for Cystic Fibrosis NSW after the girls put the idea to 2GB's Ben Fordham, who asked Huegill to come on board."

Lane 5 - Dallas News posts "DAM Spring Short Course Yards Swim Meet.  Dallas Aquatic Master's (DAM) will be hosting a swim meet on the SMU campus next weekend, Saturday, February 25, SMU Perkins Natatorium, 6024 Bishop Blvd., Dallas, TX 75275. Open to all swimmers who are 18 years or older as of February 25 and are currently registered with United States Masters Swimming (USMS).  This isn't the neighborhood kiddie meets you attended when you were a kid or as a parent. This is serious wet stuff. No flowered, cut off jeans. But, "If this is your very first Masters meet, you can enter the meet for FREE! This promotion is brought to you by the North Texas Local Masters Swim Committee."

Lane 6 - International Swimming Hall of Fame posts "Adolph Kiefer Aquatic Therapy .  Olympic great Adolph Kiefer is still swimming and keeping fit in spite of neuropathy that keeps in a wheel chair - but in the water he can walk and feel like a human again." via youtube

Lane 7 - Stuff posts "Sparkly speedo dance stuns beachgoers.  A Canadian busker who pranced around St Kilda beach in a tiny pair of sparkly speedos has become an online sensation, with video of him strutting and lunging at stunned Melbourne beachgoers attracting more than two million hits on YouTube."

Lane 8 - Perth Now posts "I didn't need rescuing but I was wasted, says Jonah Hill.  COMIC star Jonah Hill has hit back at reports he needed to be rescued by lifeguards while he was out swimming in Sydney."

Posted at 11:20 AM in In Swimming News, Masters Swimming, Olympics, Other Swim Stuff | Permalink | Comments (0)