Lane 1 - Yahoo Sports posts "Where are they now? Swim legend Duncan Goodhew.  Duncan Goodhew’s 100 metres breaststroke gold was one of the most memorable moments of the 1980 Olympic Games in Moscow, and you’ll be pleased to know he has kept very busy since." 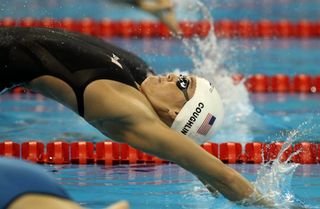 Lane 2 - LA Times posts "Olympian Natalie Coughlin on food: Eat healthfully, but enjoy it.  Swimmer Natalie Coughlin didn't earn 11 Olympic medals by eating junk food. The 29-year-old has been interested in food since her days at UC Berkeley, when she began to break out of her grilled chicken and broccoli habit and explore more appealing fare.  That led her to start cooking for herself, reading books on food and growing fruit, vegetables and herbs at her home in Northern California. We spoke with Coughlin recently about why good nutrition is important for athletes--even weekend warriors--and why good food should be enjoyed."

Lane 3 - SF Gate asks "Burning question: Who will light Olympic cauldron?  With six months to go until the opening ceremony, British bookmakers are taking floods of bets on the issue, while fans, athletes, media and the public at large are speculating on who will get the honor."

Lane 4 - The Daily Star posts "LIAM TANCOCK TURNS TO BALLET IN HUNT FOR GLORY.  ONE minute he looks like something out of Swan Lake and the next he could be in a Kung Fu movie!  Yes, variety is the spice of training life for Liam Tancock – one of Britain’s hottest prospects for Olympic swimming gold this summer."

Lane 5 - Denver Post has "Regis Jesuit grad Jun Han Kim carries Olympic dreams in South Korea.  2008 alumnus aims to make swim team in 100- and 200-meter butterfly events.  Missy Franklin isn’t the only swimmer from Regis Jesuit High School with Olympic aspirations this year.  Jun Han Kim — an incoming senior at Drury University in Springfield, Mo. and a 2008 Regis graduate — took a hiatus from his college education to return to South Korea and compete for a spot on the country’s 2012 Olympic team."

Lane 6 - Reuters posts "Olympics-UK regions fight each other, France to host athletes.  Some of Britain's poorest regions are battling each other and neighbouring France to boost their local economies by hosting Olympic athletes at training camps before this year's Games."

Lane 8 - Forbes posts "Whale Sharks: Swimming With The World's Biggest Fish In The Maldives And Beyond."

Posted at 09:49 AM in In Swimming News, Olympics, Other Swim Stuff, Shark Week | Permalink | Comments (0)