Lane 1 - SB Nation posts (w/ video) "Buzz Williams Hits A Half-court Shot, Goes Swimming.  Buzz Williams is already a college basketball favorite. He's emotional, he screams, he dances on the sideline and he's never afraid to wear his heart on his sleeve. The Marquette Golden Eagles coach just seems like a good dude to be around.  That extended to a lighthearted moment at practice this week as Marquette prepared for its Sweet 16 matchup against the Florida Gators. Sure, it's stressful preparing for a huge NCAA tournament game, but Williams keeps the mood light." 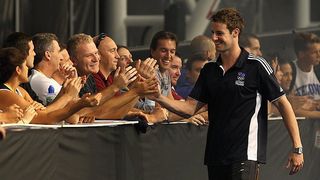 Lane 2 - The Herald Sun posts "Australian swimmer James Magnussen a 'threat, says US coach.  HOW can we get this guy on our team for the Games?  That was the reaction from world swimming's superpower, the United States, after James Magnussen's scorching performances at the Australian Olympic trials in Adelaide.  US swimming national team director Frank Busch yesterday heaped praise on Australian swimming's man of the moment, who he expected to be a thorn in the side of his team's relay ambitions in London."

Lane 3 - The Washington Post umm…posts "Shirley May France, who as a young woman tried to swim the English Channel, dies at 79.  With the words “Black Magic” emblazoned across the bosom of her swimsuit, Shirley May France captivated two continents with her attempt to swim the English Channel in 1949.  Then a 17-year-old Massachusetts schoolgirl, she would have been the youngest person in history to conquer the 21 miles of frigid double tides and currents between Cap Gris Nez in France and England’s white cliffs of Dover."

Lane 4 - NCAA posts "Cal swimmer learns from the best.  Shields always looking to improve, even by

studying dolphins.  Tom Shields is a workhorse. And because he is, Cal’s hopes of repeating as national champs at the NCAA Division I Men’s Swimming and Diving Championships that conclude Saturday have rested squarely on the junior All-American’s shoulders.  “I hear that when they do the next Flipper movie, he’s going to be the stand-in,” Texas coach Eddie Reese cracked, not knowing just how close that could be."

Lane 8 - ninemsn posts "Sunk Thorpedo had enough time, Ginn says.  Excuses that Ian Thorpe didn't give himself enough training time to qualify for the London Games doesn't wash with triple Olympic rowing champion Drew Ginn.  But Ginn, who made a comeback of his own in this Olympic cycle after taking two years off rowing as he recovered from delicate back surgery, labelled that as bunk.  The 37-year-old strongly believes older athletes only need six months of full-on hard training to return to their best.  "Having watched all the swimming last week and hearing 'oh they needed another year or two years', sorry to say it, I reckon that's bulls--t," he told AAP."