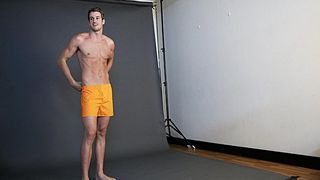 Lane 2 - The Independent posts "Swimming: Second wave seek a fitting stage.  Suit technology has been reined in but British Swimming Championships could see a rush of new records.  At this year's Games the suits will be more recognisable as those worn at the local leisure centre. Manufacturers have to submit suits to Fina 12 months in advance of a Games and non-textile materials like polyurethane, which are in effect performance enhancing, are banned. Arena will launch its new suit, worn by Fran Halsall, tomorrow and Speedo has produced the Fastskin3, a suit, hat and goggles combination that the company says reduces underwater drag by 16 per cent."

Lane 3 - You Can Play posts "You Can Play - The Faceoff.  You Can Play is supported by athletes of all levels and fans in the fight for respect in sports."  youcanplayproject.org

Lane 4 - Celebs posts "Kate Middleton Too Thin to Swim the Thames.  She recently met David Walliams, who is known in British circles as the "king of comedy" and the "sultan of swim."  "She is absolutely stunning, totally gorgeous, but not at all the build for cold-water swimming. Not like me, I'm a bit hefty.'"  It took Walliams eight days last September to swim the Thames. The water was filthy and freezing cold, too. The swim was for a charity challenge, and while he succeeded on that front, he arrived back on land with hypothermia and giardiasis." 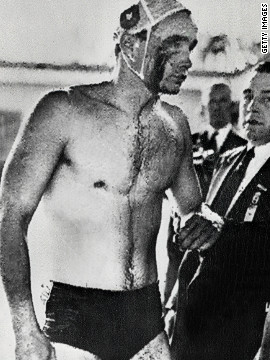 Lane 5 - CNN posts (w/video) "'Blood in the water' - Hungary's sporting battle against Soviet oppression.  rvin Zador, Hungary's 21-year-old water polo star, emerges from the Olympic swimming pool in Melbourne with blood pouring from a cut beneath his right eye. The "blood in the water" match against the Soviet Union in December 1956 came to represent Hungary's bloody struggle against its Communist oppressors."

Lane 6 - NYDN posts "Former Olympic swimmer Katherine Starr starts Safe4Athletes to help fellow abuse victims.  Hopes organization can be place kids turn to if they have been sexually abused.  Katherine Starr was at a crossroads last April, professionally and personally, when she says she began brainstorming: as a previous victim of sexual abuse in sports, how could she help make a positive impact on addressing the issue?"

Lane 7 - The Telegraph posts "London 2012 Olympics: China bans athletes from eating meat for fear of ingesting banned substance clenbuterol.  China's national team athletes headed for the London Games have been order to stop eating many forms of meat, due to fears that they could consume the banned substance clenbuterol. American swimmer Jessica Hardy also tested positive for clenbuterol at the US trials in July 2008 and served a one-year suspension, having claimed she unknowingly took the drug in a contaminated food supplement."