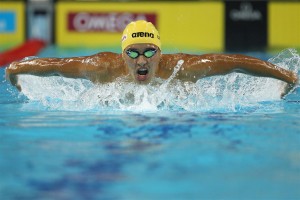 before I track down Chad for our interview he’d competed in an international swimming meet in Durban where he’d won five gold medals from his five races.  When the 19-year-old mentions his five gold medals he lets out an almost embarrassed laugh. From this I deduce that Chad is still very grounded and modest considering his meteoric rise to stardom at such a young age."

Lane 2 - Gulf News posts "Three Dubai swimmers leave for London date.  Tidey takes athletes for trial event at London's Aquatic Centre from March 3 to 10.  Dubai: Three of Dubai's top swimmers have left to compete in the high-profile test event to be held as part of the preparations for the 2012 London Olympics.  Velimir Stjepanovic and Stefan Sorak, who will be representing Serbia, and Tiago Venancio, competing under the Portugal flag, left for the British Swimming Championships that will be held at London's brand new wave-like Aquatic Centre from March 3-10."

Lane 3 - KCCI posts (w/video) "New Iowa Designed Swimsuits Headed To Olympics. When the U.S. Olympic swim team hits the pool in London this summer, they'll be wearing suits designed by an Iowan.  Kinesiology Professor Rick Sharp helped design a swimsuit for the 2012 Olympics and the women’s swim team is testing it out." via youtube.

Lane 4 - Metro posts "Liam Tancock: Ballet gives me the edge over swimming competitors.  A double world champion and word record holder in the 50m backstroke, hopes are high that the Liam Tancock can end his wait for an Olympic medal this summer."

Lane 5 - BBC posts "British Swimming Trials: Rebecca Adlington says failure "scary".  Rebecca Adlington says the prospect of failure at the British Swimming Trials is "scary" as she prepares to try and secure a place at the London Olympics.  Adlington will be among those looking to earn Olympic and Paralympic Games places when the trials, which double as a test event, begin on Saturday.  "I'm so worried it's unbelievable - the amount of weight on my shoulders is killing me," she told BBC Sport." 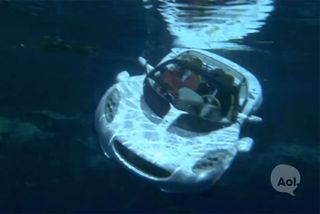 Lane 6 - Autoblog posts (w/video) "Translogic gets inside look at Rinspeed's concept shop.  The sQuba submarine car is straight out of James Bond, though it's based on a more modern Lotus than the famous Esprit from The Spy Who Loved Me. The similarly amphibious Splash can operate as either a car, boat or hovercraft. The X-Trem is an oddly styled pickup that can load and unload – you guessed it – a hovercraft from its truck bed. Similarly, the Tatooo carries an underwater scooter.  But Rinspeed isn't just about wet and wild concept cars."

Lane 7 - HuffPost has "Brooklyn Bridge Park Getting New Swimming Pool This Summer! rooklyn Bridge Park is getting a brand new swimming pool this summer. Nope, it's not the floating pool we got so excited about back in June, but pretty great nonetheless: a 30-foot-by-50-foot, above ground, 3.5 feet deep across, fully decked, temporary pool, The New York Post reports. The swimming hole will be at Pier 2 in the uplands section of the park for a whole 5 years.  Also! A deck and an artificial beach with food vendors will surround the pool.  If it's as hot as it was last summer, the pool's sure to make a big splash in the Brooklyn Heights/Dumbo communities. Perhaps a real cool pool party everyone? Take it away Aquabats!"

Lane 8 - Columbia Spectator posts "A new perspective on swimming for former Olympian.  Sophomore Dominik Koll, who represented Austria in both the 2004 and 2008 Olympics, has seen his beloved sport in a new light since coming to the US as a full-time college student."