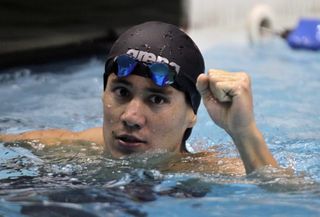 Lane 1 - WaPo has "USA Swimming will allow hand signals to accommodate deaf athletes at Olympic trials.  USA Swimming decided Thursday to allow hand signals at the U.S. Olympic trials in July to accommodate deaf swimmers at the start of their races, reversing the organization’s decision, issued less than 48 hours earlier, to not use the signals because they did not comply with international rules.  The governing body announced its decision shortly after Marcus Titus, one of the nation’s top breaststrokers and a deaf athlete, created a Facebook page asking supporters to e-mail USA Swimming officials. He was joined by officials at U.S. Deaf Swimming and the USA Deaf Sports Federation, who wanted to ensure hearing impaired athletes are given a level playing field on which to compete against hearing athletes." 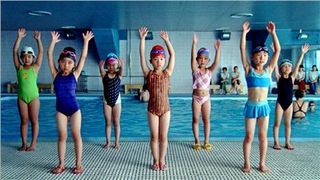 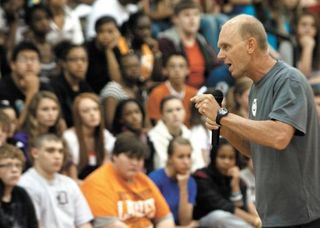 Lane 5 - Times Daily posts 'Gaines: It’s never too late to start living your dream.  Students at Deshler Middle School weren’t born when Rowdy Gaines was swimming his way to three Olympic gold medals in the 1984 games in Los Angeles.  But that didn’t matter Thursday as they watched video of Gaines touching the wall first in a heroic finish to the race of his career.  Gaines spoke to the sixth- through eighth-grade students bringing a concise, no-nonsense message of how consistency and dedication will put a person on the road to success in whatever they do.  “I was 17 years and in the 11th grade when I started swimming,” he said. “Never let anyone tell you it’s too late to start bettering yourself. That’s just not true."

Lane 6 - WaPo has "Janet Evans finishes 6th in 800 free heat as part of swimming comeback.  Janet Evans woke up in New York on Thursday and ended her day in a California pool, finishing sixth in the 800-meter freestyle as part of the 40-year-old swimmer’s comeback for the London Olympics.  Evans was at an East Coast event for sponsor BMW until midnight and then caught a 6 a.m. flight home."

Lane 7- I hate ducks!  Every morning I have to swim with the damn ducks but this is cute.  Gawker posts "Make Way For Wet Ducklings: Mother Duck Saves Her Young’uns from Swimming Pool."

Lane 8 - Orlando Sentinel posts "Celebrity swimmers help YMCA kick off pool season with water-safety push.  wo-time world-champion swimmer Michelle Griglione wouldn't have dreamed of teaching her own daughter to swim. She left that to the professionals. So eight years ago, the Orlando mother enrolled her baby in the YMCA's water-safety program.  Today, Griglione will host the kick-off of pool season at the YMCA Aquatics Center in Orlando and give a shout out for parents to sign their little ones up for the Safe Start program."