Lane 1 - news.com posts "Grant Hackett in new drinking claims.  Claims he drank five bottles of wine in two hours.  The Sunday Telegraph can reveal the swimmer's ex-wife Candice Alley made a statement to police at Melbourne's Frankston police station alleging Hackett was involved in an incident after drinking five bottles of wine over two hours at lunch."  Meanwhile Courier Mail posts "A DOWN and desperate, Grant Hackett has reportedly told friends he is sorely missing his kids as his marriage split reaches a new low with fresh allegations of boozy bad behavior." 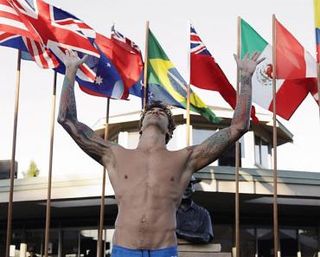 Lane 2 - SF Gate posts "Anthony Ervin back in swimming after decade off.  It's not unusual for an elite athlete to take a year off from the intensity of competition in order to restore body and mind. It's quite another to take a decade off, as swimmer Anthony Ervin did."

Lane 3 - mlive posts "Pipeline Erodes to Olympics as Colleges Struggle to Support Non-Revenue Sports.  For 17 days this summer, much of the nation will set aside its economic angst and election-year acrimony to rally behind the U.S. Olympians competing at the 2012 London Games. But come fall, many of the sports in which these athletes compete — swimming, wrestling and gymnastics, among them — will be fighting for survival on college campuses around the country.  Olympic sports have become an endangered species at many major universities, where athletic departments are dropping varsity teams to remedy deficits and invest more heavily in the revenue-generating sports of football and men's basketball." 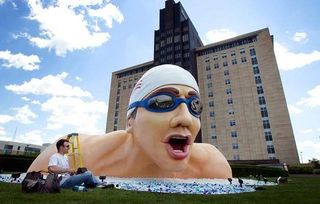 than life. The U.S. swimmer peering onto Dodge Street from Mutual of Omaha's front lawn fits that description better than most.  The 12-foot-tall, 25-foot-wide sculpture portrays a male swimmer appearing to be emerging from the water to take a breath. His brown hair is mostly hidden under a white cap, which has the U.S. flag stamped on the side. His eyes are masked behind silver reflective goggles. Blue and white rocks layered below the sculpture help simulate splashing water."

Lane 5 - WRCB posts (w/video) "Local amputee swimmer going for the gold.  DALTON, GA. (WRCB) -- Three years ago, Trey Davis had his left leg amputated from his ankle down. That didn't slow him down. He's been picking up speed as a competitive swimmer.  Born with a bone deficiency, by 11 years old his left leg was more than six inches shorter than his right leg.  Doctors wouldn't let him play sports. When he wore his special shoes, kids called him names. Less than three years later, Trey who has remained positive through it all, is one of the nation's top amputee swimmers." 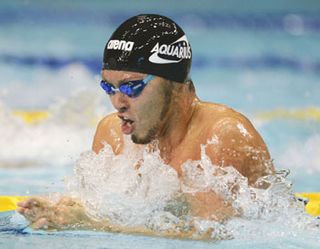 a race have served him well for nearly a decade as an elite athlete. He has learned what he needs to do in order to be in tip-top shape for the premier competitions — nationals, world championships and Olympics — and this year's national championships was no different."

Lane 7 - NY Times posts "Swimming in Sync At a London Hotel.  Women with a case of Olympic fever can try to ease it with a dip in the pool at The Berkeley hotel in London, where synchronized swimming classes are being offered this summer."