Lane 1 - WSJ posts "Schools That Train the Enemy.  As NCAA Teams Subsidize World-Class Instruction for Foreign Olympians, Some Cry Foul…Among scores of others likely competing in London this summer will be Grenadian sprinter Kirani James (University of Alabama), New Zealand swimmer Lauren Boyle (California-Berkeley) and Belgian sprinters Kevin and Jonathan Borlee, former stars at Florida State…The situation troubles Americans such as swimmer Rowdy Gaines, the three-time Olympic gold medalist. He favors capping the percentage of international athletes on U.S. college teams to preserve a majority of opportunities for U.S. athletes. Fielding so many foreign athletes, Gaines said, "hurts our Olympic movement, which we have to think of, first and foremost." 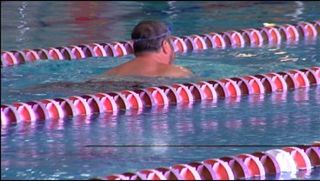 Lane 2 - WMBF posts "Don't know how to swim? New program could save lives.  All this week, Grand Strand Masters Swimming is teaming up with the City of North Myrtle Beach to host its second annual "Swimming Saves Lives" program. The program aims at teaching people over the age of five basic swimming and water survival skills.  The catch here -- the classes are free." 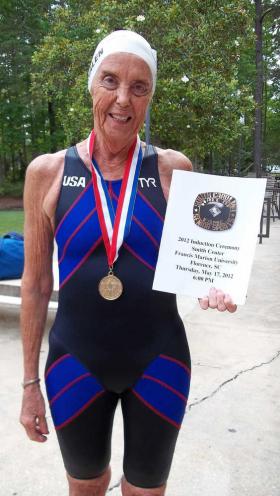 Lane 4 - Savannah Now posts "Master swimmer gains sports star status.  Nana Whalen's entrance into the South Carolina Senior Sports Hall of Fame stemmed from her mother's gift of swimming.  Whalen, 74, was inducted May 17 into the hall and joined 15 other state seniors who have been so honored since the recognition began in 2008...Whalen, 74, never swam competitively in those pre-Title IX days when athletics for women were almost non-existent…Whalen also teaches therapeutic water classes in the pool and has done since 2000 — first at the Bluffton Pool and then in Sun City. She travels to different seminar sites once a year to learn new techniques, bringing those lessons back to her students. Many of those taking her classes are post-polio, or deal with chronic diseases such as Parkinson's, Multiple Sclerosis, arthritis or are recovering from knee and hip surgery. Bronsky has had occasion to watch Whalen work with her students."

Lane 6 - SI posts "After years of relays, Dana Vollmer leaving her mark as an individual.  When Dana Vollmer was a kid growing up in Granbury, TX, her club coach gave her and her fellow swimmers a sheet of paper with a choice: like to win or hate to get beat. "I always circled 'hate to get beat,'" says Vollmer. "It's a different motivation. It's harder for me to push when I am way ahead. It's one reason I love anchoring relays. I get so much energy when I see someone dive in ahead of me. That's not okay."

Lane 7 - WLBT 3 posts (w/video) "100 Black Men of Jackson offering swim classes.  Summer is here and far too many people who can't swim are near or on the water.  A study by USA Swimming found nearly 70% of minority children have low or no swimming ability.    The study is serving as a catalyst for widespread awareness.  100 Black Men of Jackson hopes to stem the tide of accidental drownings. Swim and life saving lessons are now available for children ages 8 to 17 years old."

Lane 8 - ABC News posts "Water Polo Coach Claims He Was Fired for Being Gay.  Mitch Stein, a gay television producer living with his partner and two daughters in Pomona, Calif., had forgotten about some "fun" photos that he had posted online years ago. But he believes those photos cost him his job last August as an assistant boys' water polo and swim coach at the Charter Oak Unified School District, where his 15-year-old biological daughter goes to school and is on the girls' team."