Lane 1 - news.com.au posts "Ian Thorpe's demons revealed.  SWIMMER Ian Thorpe battled alcohol and depression as he tried to cling on to his career after the Athens Olympics.  The revelations are understood to be in his new tell-all autobiography, written in conjunction with author Robert Wainwright and to be released through publishers Simon & Schuster on October 1.  In extracts already shopped to magazines, the swim legend explains how he battled depression and alcohol while training in the US. It is understood they were also offered stories to be covered 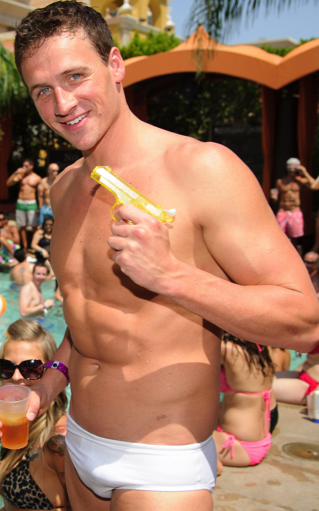 in the memoir about his financial woes and sexuality."

Lane 2 - Las Vegas Weekly posts "2012 London Summer Olympics gold medalist Ryan Lochte partied at Maxim Fridays in Tao Beach the day after a night with friends at nearby Tao Nightclub in the Venetian."

Lane 3 - CNN posts (w/video) "Diana Nyad making fourth attempt at Cuba-to-Florida swim.  On Sunday, more than 30 years after her last competitive swim, she will once again take to the waters of the Straits of Florida to attempt the 103-mile swim.  It's her fourth attempt to claim what she calls the "Xtreme Dream."

Lane 4 - Journal Star posts "U of Iowa weighs future bids for Olympic trials.  The University of Iowa is weighing future bids for Olympic trials — including swimming and diving trials that have been held recently in Omaha — after turning a $300,000 profit as host of the U.S. Olympic Wrestling Trials this year.  The success of the April event has organizers looking ahead to the 2016 games in Rio de Janeiro."

Lane 5 - The Telegraph posts "I push my body to the limit every day. It’s horrible. I’ve done it too long.  Becky Adlington apologised to fans at the Olympics for not winning gold. Now she is fighting back at her critics.  Becky Adlington is off to Disneyland “to be a big kid” for a while."

Lane 6 - NYDN posts "Kim Kardashian tweets her latest ‘night swim’ bikini photo.  Even when the sun doesn’t shine, Kim Kardashian is more than happy to don a bikini, hit the beach and tweet the results to her millions of followers."

Lane 8 - The Age posts "Life turns 360 for our oldest world champions.  In a swim that brought a crowd of about 200 screaming spectators to tears, the four Melbourne ''golden girls'' set a world masters record in the 4 x 50-metre relay, swimming the race in about five minutes, 45 seconds.  The women, members of the North Lodge Neptune AUSSI Masters Swimming Club, recently discovered that no one had ever entered a world record for a relay swim in the ''360'' masters division (representing the total ages of team members)."