Saturday's Swim Report - The Next Wave Of Swimmers Target London

Lane 1 - The Guardian posts "Ellie Simmonds' resolve toughens as Paralympics 2012 deadline beckons.  Behind ParalympicsGB swimmer's public talking down of her prospects, the 17-year-old is increasingly relishing the challenge.  When Ellie Simmonds sat down to watch the Olympics 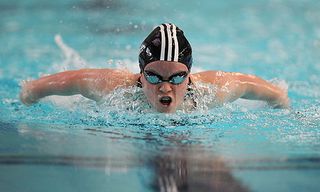 closing ceremony, she was thinking less about the two previous weeks, and more about what was to come. "That means we are next!" tweeted the Paralympian swimmer, adding the cheeky hashtag: #thanksforthewarmup."

Lane 2 - boxscorenews.com posts "Canadian swimmer Brian Hill ready for fourth Paralympic Games.  isually impaired swimmer Brian Hill, an adopted Montrealer originally from Duncan, B.C., will be competing at his fourth Paralympic Games next week and is determined to set personal best times in each of his two races.  Hill will compete in the 100 butterfly on August 31 and the 100 backstroke on September 3 in the S13 class. The 29-year-old was born with a genetic retinal disorder that results in only 10 per cent vision."

Lane 3 - The Sydney Morning Herald posts "An inevitable success story destined to leave London.  WHAT do a runner competing at his fourth and final Paralympics, a 70-year-old competing at her 11th and a champion swimmer who will be racing in up to eight events all have in common? The answer is: one of them will leave London as Australia's most successful Paralympian…Libby Kosmala, whose Paralympic career stretches back to 1972 when she competed as a swimmer before shifting to shooting. She has nine gold medals and three silvers. She also attended Tel Aviv in 1968 as a team official."

Lane 4 - Daily Mail posts "So, what is Lexicon Decoder, or LEXI for short and how is it helping the 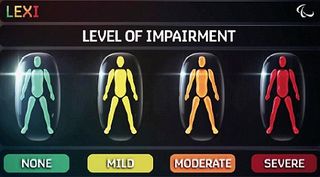 Paralympics?  LEXI is a graphical way of looking at the classification at the Paralympics, aiming to simplify the system that gives the Games the structure for fair competition.  LEXI, short for Lexicon Decoder, uses colour-coded graphics to show the type and level of impairment within sporting classes, green for no impairment up to red for a severe impairment.  These are the kind of issues the coverage seeks to deal with, assisted by Giles Long, a triple Paralympic gold medal-winning swimmer who got so fed up with explaining the classification system to his friends that he devised a system of his own which is being used in Channel 4’s coverage.  ‘My first Paralympics in Atlanta in 1996 wasn’t on TV, so there was nothing out there not to understand,’ said Long. ‘In Sydney, there was a lot more but even my friends who knew my disability didn’t understand the system, which told me that 99 per cent of people watching would not be able to fathom what was going on.’"

Lane 6 - The Independent posts "Paralympic profile: Daniel Dyas, swimming.  No one can accuse Daniel Dias of lacking the kind of self-confidence that inspires athletes to be the best. The 24-year-old Brazilian Paralympic swimmer won more medals at Beijing than any other athlete, and he is often compared to fellow multi-medal-winning swimmer Michael Phelps."

Lane 8 - The Mirror posts "The feelgood factor is back: Paralympics set to light up London again, says Storey.  Paralympics star says the marvellous Olympic atmosphere will return again when the London Paralympic Games start this week."