Sunday, SunDAY, snooze...  No Monster Truck action, No Morning action period!  Well I did swim.  Even if it was sleep swimming.  I didn't drink at all last night knowing I'd get up and want to swim today.  To be honest I did set two alarms for this morning with the first being a "just swim" alarm and the other a bit earlier being a "short run then swim" alarm.  It's August 12th which means it's been 12

days since I told myself I'd start running again.  I haven't ran since April!  OY!  I gotta switch back to the other OTC Sleeping Pills.  The ones I've been taking make me so tired in the morning.  I so am not motivated.  In fact I felt like I was sleep swimming for 96% of my morning swim. 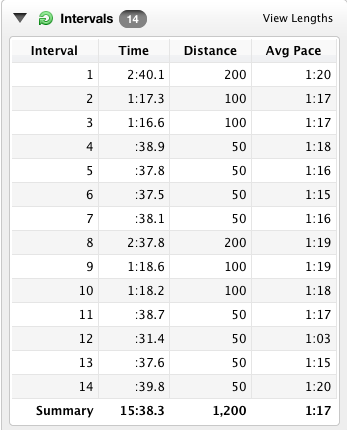 I screwed up during my last 4x50's.  That isn't a 31.4 for 50 yards.  I messed up with the clock.  I couldn't remember if I started my watch up again while pushing off the wall so I went into panic mode trying to start/stop/start the watch.  Those times are bad bad bad!  I'm blaming my sleep and 87F/88F water.  That and I really had no one to push me to do anything as I was on my own.  But 2,000 yards in 45 minutes.  As I keep telling myself "At Least It's A Swim".

And since I can only swim one more time this week I gotta love any swim I can get.  All this week except Tuesday I gotta be at work early to teach or just work in general.  So no swimming except for my day off on Tuesday.  I got 18,797 yards to swim to make my 150 mile goal by the end of this month.  I'm hoping I can get in at least 7 swims for the rest of the month.  I know I just swam 5 last week alone.  But work!   Three of those are coached workouts so about 3,000 yards each so le'ts say I have 13,000 yards in 4 workouts on my own so I gotta do at least 3,250 yards on each of those days.  EEK!  That's gonna be a tough one.  Maybe I'll sneak in some afternoon swims after my morning work shifts.

On another note I'm going to swim a 2.5K Open Water swim in October.  Last year I did my first open water swim with a 1K down in Siesta Key.  Well I'm going back again.   This time for a 2.5K.  I figured if I'm gonna spend all that money on hotel/food/transport I gotta do more then just a 1K and a 5K just sounds crazy!