Lane 1 - The Columbian posts "Swimmer triumphs after mastectomy.  Vancouver woman found ways to keep cancer treatment from blocking her stroke.  The number of medals Vancouver resident Arlene Delmage won during the 2012 U.S. Masters Swimming Summer National Championships is impressive.  But the year that led up to the July event makes the victories incredible.  Just 10 weeks before the championship meet, the 50-year-old underwent a mastectomy, the latest procedure in her treatment for breast cancer."

Lane 2 - Contact Music posts (w/video) "Olympic Swimmer Ryan Lochte Is Interviewed In Vegas After Winning Gold At 2012 London Games.  Topless US Olympic gold medallist and World Record holder Ryan Lochte poses for press photos and takes an interview at Azure Pool in Las Vegas. In one shot he is posing alongside four toned bikini models. One photographer asks if he's going to take a dip in the pool to which he replies, 'I got my speed on, I'm ready to go!" 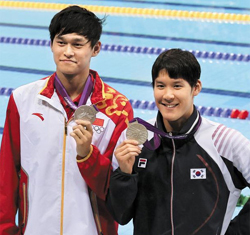 The silver medal that swimmer Park Tae-hwan won in the men's 200-m freestyle at the London Olympics was not the real deal but rather a counterfeit version, according to the Korean Olympic Committee on Monday.   The IOC prepares copies in case of emergencies, such as an athlete misplacing one, or in the event of two athletes sharing the same medal, which was the case for Park. He won two silver medals in London -- in the men's 400-m freestyle and 200-m freestyle, -- but had to split second place with Chinese swimmer Sun Yang in the shorter event."

Lane 4 - WCNC posts "Ask gold medal swimmer Ricky Berens a question.  Gold medal swimmer, South Meck grad and Charlotte native Ricky Berens will stop by NewsChannel 36 Tuesday afternoon.  While he’s here, he’ll answer your questions and try to give you a personalized reply. You can ask about anything: the Olympics, swimming, Speedos, whatever you want.  Via e-mail: Send your question to news@wcnc.com. Include “Ask Ricky” in the subject line."

Lane 5 - The Sun Chronicle posts " An Olympic-sized honor for Beisel.  Pats fans cheer medal-winning swimmer who trained with Attleboro swim club.  All those long drives from southern Rhode Island to Attleboro and back paid off in a big way for Elizabeth Beisel.  And now, life is a whirlwind for the U.S. Olympic swimmer from Saunderstown, R.I., whose days with the Attleboro Bluefish swim program helped mold medal-winning performances in the recently concluded London games."

Lane 6 - NY Times posts "Phil Moriarty, Coach of Swimmers and Divers at Yale and Olympics, Dies at 98.  Phil Moriarty, one of the nation’s most successful swimming and diving coaches and a legend at Yale, died on Saturday in Mystic, Conn. He was 98."

Lane 7 - syracuse.com posts "Watching a child take a leap into swimming becomes a parent's own Olympic moment.  he first time I brought my son, Leo Marino, to Mexico Academy and Central 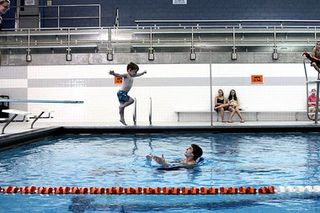 School Learn to Swim program, he was 8 months old and wearing a little red swim diaper. After trying in vain to pry him off me and hand him to a teen-aged instructor, I gave up and got in the pool with him.  I had no idea what to do, but the young teacher did. Over several days, she stood with us in the shallow end and patiently fetched toys -- plastic fish, tiny watering cans, little boats -- to entertain Leo until he let her take him without tears."

Lane 8 - CNN posts (w/video) "If my options are sink or swim, I choose swim!  Editor's Note: Glenn Keller is one of seven CNN viewers selected from around the country to train for and compete alongside Dr. Sanjay Gupta in the Nautica Malibu Triathlon in September.  At the beginning of the challenge, Keller weighed more than 300 pounds and suffered from sleep apnea due to his obesity."