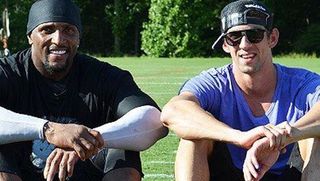 a die-hard Ravens fan, has credited linebacker Ray Lewis with helping him get his competitive juices flowing up to the London Games."

Lane 4 - Des Moines Register posts "Olympic swimmer teaches need for swim lessons to Urbandale teens.  Olympic swimmer Cullen Jones taught six Urbandale Middle School students how to swim today at the public pool. The gold medalist met with the whole school earlier this morning to tell his story about how he got into swimming and why water safety is important.  Jones is working with USA Swimming Foundation on the Make a Splash tour to encourage students to get swimming lessons. Urbandale was one of six cities he will visit this year."

Lane 5 - Daily Trojan posts "Rebecca Soni continues USC’s Olympic success.  For Olympic swimmer Rebecca Soni, the last month of summer seemed nothing out of the ordinary for a Trojan alumna. She met up with old friends, relaxed as much as possible and took a trip to London."

Lane 6 - Chicago Tribune posts "Baghdad orphan Kelly eyes pool gold for Australia.  He has described himself as the happiest man alive, yet in 20 years Iraq-born swimmer Ahmed Kelly has risen above extreme hardship to become one of Australia's leading medal hopes at the London 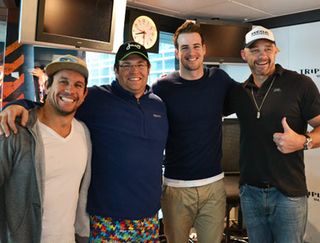 Paralympics.  Kelly, along with his brother Emmanuel, was born severely disabled, with under-developed limbs as a result of their parents' exposure to chemical weapons."

Lane 8 - WSJ posts "Swimming Bunnies Offer Android Game Solution to Island Spat. In the free game, Takeshima Struggle, players race a cartoon rabbit from either Japan or South Korea to an island representing the disputed territory in order to claim it. The Japanese maker of the game hopes the swimming bunnies will help lighten the tone of the debate and improve relations between the two neighbors as they seek to find a peaceful end to their island spat."