The new Swim with Friends campaign is designed to raise funds and public awareness of children and families facing cancer. Since 1995, Aflac has raised and contributed more than $70 million for childhood cancer-related initiatives.

"Aflac's commitment to eradicating childhood cancer has never been stronger," Aflac Vice President of Sponsorship, Events and Cause Marketing Danny Fleishman said. "Our Swim with Friends campaign will amplify that commitment through various traditional and social media networks, allowing people across the country to join us in the fight against childhood cancer."

On October 9, at noon ET, Aflac will conduct its first ever virtual duck race, culminating in the 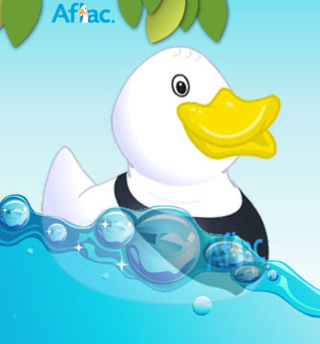 announcement of a grand prize winner who will receive a family vacation for four to Orlando, Florida.  The online event is an exciting new way to entertain families while raising money for childhood cancer. People interested in entering can go to Aflac.com/friends to make a $12 contribution, with the net proceeds going to the Aflac Cancer and Blood Disorders Center of Children's Healthcare of Atlanta, enter the sweepstakes and receive a commemorative rubber duck (see official rules here).  Aflac will match each $12 donation and additional donations; however, the company's matching contribution will not result in an additional online entry.

The race can be viewed at noon and throughout the afternoon on October 9 on the Aflac Duck's Facebook page at http://www.facebook.com/#!/aflacduck.

To build momentum for National Childhood Cancer Awareness Month, Aflac will host a virtual pool party on Twitter (#Aflackids) on September 6 at 9 p.m. ET. This event will promote exciting events to come, including the online virtual duck race. Aflac will donate $2 for every tweet about the program using the hashtag #Aflackids.  RSVP for the #AflacKids Swim With Friends Twitter Party Thursday 9/6 at 9pm ET! shespeaks.com