Lane 1 - Ebony posts "Catching Up with Cullen Jones.  Still riding high from his Olympic triumphs, the New Jersey-bred athlete spreads the gospel of swimming to young African-Americans (and shares a little personal dirt)."

Lane 2 - Sponges Take Your Mark?  Dawn Dish posts via youtube "Swimming Sponges II.  Watch how Dawn does more with less soap drops than it's competitors in a swimming competition! http://www.dawn-dish.com"

Lane 3 - SkyNews posts "Magnussen will learn from London - Spitz.  Mark Spitz is revered as one of the greatest Olympians, but like James Magnussen his Olympic swimming career failed to start 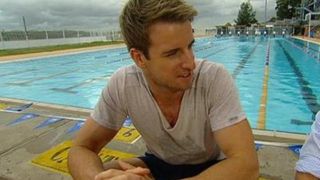 in the fashion he had hoped and predicted.  The 62-year-old said there was added pressure in Munich, but that his experience in Mexico helped him rise to the occasion.  Spitz believed it would be a similar story for Magnussen in four years at Rio de Janeiro.  'He'll gain that experience of having been to an Olympics,' Spitz said at the Australian launch of New Vitality supplements in Sydney."

Lane 4 - The Age posts "Swimming review not the answer: Spitz. US Olympic legend Mark Spitz finds it strange Swimming Australia is holding a review into the nation's performance at the London Games, saying no one resolution will satisfy every party and benefit every athlete.  Spitz, who won seven gold medals in the pool at the 1972 Olympics - a record only broken in 2008 by compatriot Michael Phelps - believes Australia's swimming performance in London was "great".  "Sometimes you can get too close to the forest and you can't see through the trees," Spitz said on the 40th anniversary of winning his seventh gold medal at Munich." 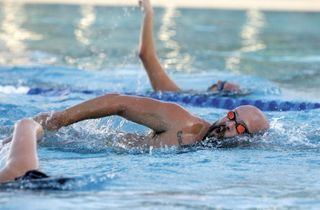 seaweed. Judy Holloway swims for fitness. Christy Zolla was a collegiate athlete with swimming in her blood.  These days, they work out side by side as members of the new Santa Maria Swim Club Masters Swimming Program at Paul Nelson Pool.  “You get something from swimming as a group,” Zolla said. “It’s a competitiveness that drives you to work harder, to motivate each other. You swim better with a little pressure, and it’s more fun.”  The team is affiliated with U.S. Masters Swimming, or USMS, a national organization that, since 1970, has provided organized workouts, competitions, clinics and workshops across the country for adults age 18 and older."

Lane 6 - BBC posts "Devon wild swimmers' dip in the Eiffel Tower fountains.  Three Devon wild swimmers say they have become "urban guerrillas" - by swimming near Paris's Eiffel Tower.  They were among 5,000 people due to take part in a swim in the River Seine, but it was cancelled amid fears about the water quality.  Instead, Matt Newbury, La La Mahakama and Queenie Martin chose the Trocadero Fountains as a substitute.  Dressed in union jack swimming caps, the trio's "impromptu water ballet" amused hundreds of spectators."

Lane 7 - 8-Bit Greatness!  Tea&Cheese posts via youtube "Greatest 'Gaming' Moments 01 - Mark Spitz.   series of pixel animations we made for the Telegraph Sport, to celebrate the heavily copyrighted sporting event that we're not allowed to type :D"

Lane 8 - SB Nation Dallas posts "How Do You Break A World Record At 75?  William Blake is a Dallas-area swimmer who was part of a 4x200 relay team that recently broke the world record for his age group. A conversation about what drives someone to compete way into their golden years."