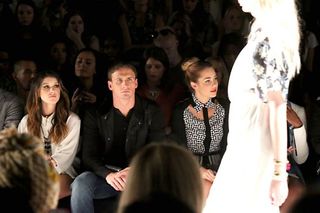 Rebecca Dana on his upcoming menswear collection, reality-TV projects—and a line of bedding. You may not be able to sleep with Ryan Lochte, the Olympic swimmer and ubiquitous grinning presence at New York Fashion Week. But pretty soon, you might be able to sleep on him.  The 28-year-old 11-time Olympic medalist is in talks to develop a line of Lochte-branded bedding made out of a moisture-resistant fabric similar to that of dry-fit workout clothes, according to his manager Erika Wright. And that’s not all. If everything goes as planned, the next year will see the rollout of a sprawling multimedia Empire of Ryan, with extensions into fashion, fitness, entertainment, protective sunwear, sheets, and beyond." 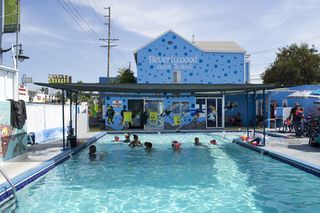 swim school in America. The school was founded by Crystal Scarborough, a woman whose methodology we still use today. Her mission was to teach children who had failed out of other swimming programs how to swim."

Lane 4 - NOVAFM posts via youtube "Russell Crowe calls James Magnussen during Fitzy and Wippa chat.  he Missile was midway through talking about his Canterbury Bulldogs when Wippa had to mysteriously disappear. Then shortly after Russell Crowe called up to talk to the Olympic swim star about the Rabbitohs, riding horses and that golden Oscar he won."

Lane 5 - The Sydney Morning Herald posts "Pranks plague men's swim team as bully claims emerge.  Swimming Australia will launch an investigation into the culture of the national swimming team after allegations surfaced of bullying, favouritism and disturbing pranks that 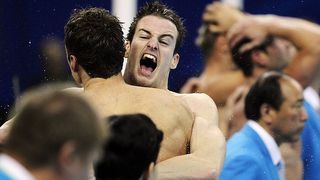 undermined the team's morale as it prepared for the London Olympics, according to a report.  Other disturbing allegations of ill-discipline among the team include claims that two male swimmers kept the body hair they shaved off before competition and scattered it in the beds and bags of other swimmers.  One of the youngest team members was allegedly bullied by older team members, while team morale was reportedly so low that some swimmers were pleased when the men's 4 x 100m relay team failed to win a medal."

Lane 6 - Wicked Local posts "25th annual Swim for Life in Provincetown.  Celebrating its 25th year of fundraising for AIDS, women’s health and the community, the Swim for Life & Paddler Flotilla took place under breezy, sunny skies and choppy but warm water last Saturday, with 404 swimmers from as far away as Alaska, 100-plus kayakers and boats on the water, and 150 volunteers."

Lane 7 - BET posts "Sept. 11 Tragedy Fueled Lia Neal’s Triumph.  The Olympic bronze medalist was the recipient of a scholarship in memory of two 9/11 victims.  Neal was the recipient of a Swim for the Future Scholarship, an award created in honor of two New York City swimmers, Andrew Fisher and Doug Irgang, who died on 9/11. The award provides young people with funds that allow their families to afford the $3,805 needed to join the swim team at Manhattan’s Asphalt Green Unified Aquatics, where Neal has trained since elementary school. The scholarship has awarded more than $200,000 to 78 swimmers since it began.  Both Fisher, 42, and Irgang, 32, were Master swimmers who also trained at the Asphalt Green Unified Aquatics Center."

Lane 8 - USA Today posts "Swimming pools starting to go au natural.  Jeff Steinberg's backyard oasis has a luxury pool with a walk-in beach, an integrated hot tub and a stream with local river rocks. But there's something it doesn't have: chlorine.  His natural swimming pool in Princeton, N.J., uses plants in an adjacent area to clean the water, creating an aquatic habitat that includes water lilies, lotuses and toads."