Okay so maybe I'm paranoid a day later but I'm itchy all over!  The salt water is icky!  After 750 Meters into the swim I wanted to get out.  My mouth tasted horrible from getting salt water in it.  My nose was burning from the salt water.  And I was feeling this itchy burning senstaion around my left arm pit.  Then again I wanted to quit when before the race after I pee'd in the ocean and saw little fish all over the place.  Ewww!  No one told me thy had living creatures in the gulf.  I thought that BP Oil Spill was supose to kill them all.  Damn you BP can't you do anything right? 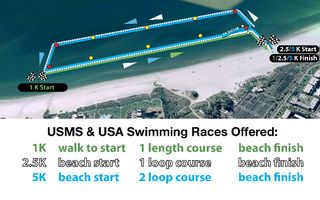 Now maybe I should have looked at the map before and listened to the instructions before getting into the water.  Somehow I didn't fathom how far out we had to swim at the beginning of the race to get to the first bouy thingie.  It was far!  I did hear that then the bouy thingies would be 250 meters apart.  Okay I was thinking as it seemed like years before I passed the first one.  After that the distance seemed shorter.  I do know I was swimming all zig zag.  So instead of 250 meters between bouy thingies I swam like 275.  Plus I kept stopping cuz' that damn sun thing was coming up and I couldn't see anything more then 10 feet ahead of me.  Never mind the water being super dark.  Which was good cuz' I thought I felt many things touch me as I was swimming.  I tried to stay straight on course by trying to swim next to people but I ended up swimming into them instead.  After the first 1000 meters it was time to turn.  Once again I failed to understand how far away it was before we turned.  I was under the assumption we just turned at the bouy thingie and swim back.  But NOOOO!  We had to swim down to another bouy which seemed like another 1000 meters.  I think the not knowing where the fuck I was swimming to made it worse.  Damn it!  Then it was all fun after that.  I figured it was only 1000 meters left.  I felt good so I tried to go faster.  But that 250 meters to the first bouy was hell.  I was in a pack that seemed not to friendly.  People started to cut each other off.  I felt a tug on my leg.  Mind you it was myself, another guy and a bunch of girls.  Sorry bunch of ladies.  The ladies were the one's pulling and cutting off.  I picked up the pace and left them behind.  I got into another pack that was all that all over again.  Then with about 500 meters to go I see a guy with a green cap.  I spent the next 250 meters getting away from him.  Towards the end I saw two green caps ahead of me.  Oh yeah, green caps were the 2.5K'er swimmers.  So I tried to catch them.   But not enough time left.  Plus one really pulled ahead when the swimming stopped and the running started.  I cannot run in two feet of water.  Or even one foot.  I was struggling to move.  So that was it.  My first and last 2.5k Open Water Swim.  Hell it was my last Open Water Swim.  I'm sticking to following the black line.

So overall I swam it in 46 minutes or 46:07.4.  Came in 2nd in my age group and 7th overall.  I know it was a slow time cuz' I wasn't tired after.  That and a team mate who I'm more then a minute faster then in the 1,000 Meter race came in about a minute after me.  Oh well, what can I say I'm not an open water swimmer.  Open water is for the fishes and anything else that BP hasn't killed yet.  Oh yeah and on top of this whole horrible swim I got what I was told was Sea Lice Bites.  But it turns out Sea Lice don't bite humans so I got bites from the larvae of the thimble jellyfish, Linuche unguiculata.  The best part of this is..."Symptoms may include fever, chills, headaches, nausea and vomiting. Severe symptoms occur in children particularly, although adults have also shown similar reactions."  Read more about the Linuche unguiculata HERE.  Yet another reason to never ever go in the ocean/gulf again.

I have major sea lice too. It's not actually a bite, it's your skin's reaction to the nematocysts' touch. Some people have worse reactions than others. Mine is pretty high up there, including low grade fever today. I used to get it all the time in south Florida and refused to go in the ocean for years until Jim suckered me into this new swimming venue. However, I've had almost no issues in Jacksonville water. The Gulf waters are officially an evil place... And I'm probably going to scratch my skin off before tomorrow.