Lane 1 - Courier Mail posts "Olympic swim star Stephanie Rice lands TV gig with Nine .  VEN the model good looks and world-beating athletic ability haven't been enough to spare Olympic swim star Stephanie Rice an ugly introduction to life in the spotlight. While she's yet to decide just when she'll hang up her goggles, the glamorous new TV star says her new job has renewed her focus and hunger to learn.  Moving to Sydney before Christmas, and launching a kids' swimwear range 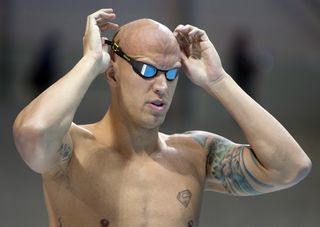 for the next gen of little Olympians, she says has also found personal "stability'' after a string of high-profile relationships and equally public break-ups."

Lane 2  - The Vancouver Sun posts "Brent Hayden goes from the pool to B.C. Sports Hall of Fame. Brent Hayden may no longer be swimming competitively, but you had to know the lanky kid out of Mission, who grew into a world champion and Olympic bronze medalist, wouldn’t stray far from the pool.  “I’ve been coaching swim clinics and doing public speaking,” Hayden, 29, said Tuesday after being a B.C. Sports Hall of Fame inductee, class of 2013. “I was just in the Northwest Territories last week for a six-day tour in Hay River and Yellowknife." 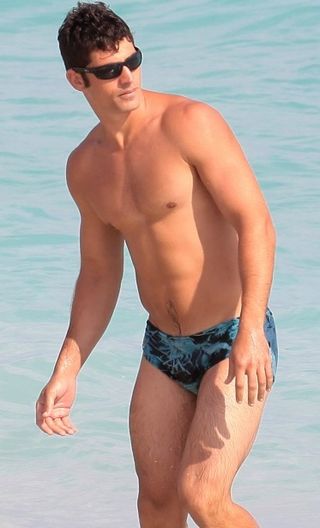 yesterday afternoon in Miami Beach!  The 24 year old’s name is Elio Pis. He is a Cuba-born model who graduated with a BA in Psychology from Florida International University in 2010."

Lane 6 - 9 News posts "Aussie swim team's Gold Coast camp.  In another bonding initiative following the fallout from the London Olympics, the Australian swimming team will train alongside the country's rising stars at a six-day national camp on the Gold Coast next week.  Fresh from the success of the inaugural Super Series team event in Perth, the Australian squad will rub shoulders with the country's "generation next" across eight pools throughout the tourist strip from Monday.  It ensures James Magnussen will train with teenager Luke Percy who collected a gold medal and set a new Australian Youth Olympic Festival (AYOF) record in the men's 50m freestyle (22.46) in Sydney."

Lane 7 - News Sun posts "Gold Medal Swimmer to drive at Skip Barber Shootout.  Olympic gold medalist swimmer Tyler Clary will be at Sebring International Raceway this week with the Skip Barber Racing School INDYCAR Academy.  Clary's passion for racing began when he was young.  "I've always been around fast cars and sand rails, so naturally it's been an interest of mine. For as long as I can remember, I've always sought the thrill of being at the wheel of any fast car," he said.  That, combined with the fact that he "just loves driving," has fueled his pursuit of racing."

Lane 8 - MTV UK posts "Tom Daley: 'I'd Like To Play Tarzan In Movie'  Olympic diver ready to swing into film career as lord of the jungle...he 18-year-old hunk told OK! magazine that he'd like a crack at playing the lord of the jungle when asked if he fancied a movie career.  "I would give it a go – how about a remake of Tarzan or George Of The Jungle," he replied."

Posted at 10:15 AM in Diving, In Swimming News, James Magnussen, Olympics, Other Swim Stuff, Worked Out Celebs | Permalink | Comments (0)