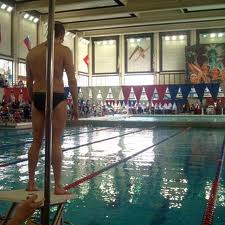 been handed the task of reviving the fortunes in pool after being confirmed as the new head coach of British Swimming."

Lane 2 - Gazettes post "Belmont Pool Closes Permanently; Meet On New Design Wednesday.  There will be no more swimming in the Belmont Plaza Pool.  The pool is nearly 50 years old, and hosting the U.S. Olympic Swim Trials in 1968 and 1976, as well as the NCAA national championships in 1974 and 1978. The indoor pool, or Natatorium, has been a candidate for replacement for more than five years, including an order from the City Council a year ago for a new study and design."

Lane 3 - UConn posts via youtube "Swim Team In Super Slow Motion.  The UConn Swimming and Diving Team has a strong tradition of athletic and academic excellence. The team has a combined 5 NCAA All Americans and both the Men and Women are recognized as Scholar All-American Teams by the College Swimming Coaches Association. The footage in this video was captured at their competition against Seton Hall on January 27, 2013. During the competition, UConn wore green and white caps in honor of those who lost their lives at Sandy Hook Elementary School in Newtown, CT."

Lane 4 - BBC posts "Rebecca Adlington: Olympian ready for life after swimming.   With four Olympic medals, two gold and two bronze, Rebecca Adlington retires from competition as Britain's most decorated swimmer.  Her career may have ended in tears of sadness rather than joy after she finished third in the Olympic 800m freestyle final, but Adlington's status and legacy was secured long before she touched the wall for the final time at London 2012."

Lane 6 - Radio Times asks "Should Splash! get a second series?  As coach Andy Banks hints at another round of high-diving, let us know whether you want to see a return for Tom Daley's talent contest."

Lane 7 - Japan Times posts "Kitajima to swim for at least one more season.  Former two-time double Olympic breaststroke champion Kosuke Kitajima will not retire any time soon, saying Monday that he will continue to compete for at least another season.  “I want to enjoy swimming this year,” said the 30-year-old Kitajima, who did not win an individual medal at the London Olympics last year. “I want to keep swimming until I’ve had absolutely enough."

Lane 8 - Zee News posts "Olympic champ reprimanded for breaking rules.  Beijing: China`s star swimmer and Olympic champion Sun Yang has been "punished for breaking a series of team rules".  The Zhejiang College of Sports, to which the dual Olympic champion is affiliated, accused Sun of "indiscipline" in a statement issued on Monday.  The college also withheld a month of his allowance and "provincially suspended" him from all commercial activities."

Posted at 11:41 AM in Diving, In Swimming News, Olympics, Other Swim Stuff, SwimOutlet.com | Permalink | Comments (0)