Lane 1 - The Hollywood Reporter posts "Joey Lawrence and Charissa Thompson to Host ABC's 'Splash'.   The celebrity diving series, which premieres March 19, will include the actor and former "Dancing With the Stars" competitor and the ESPN personality." 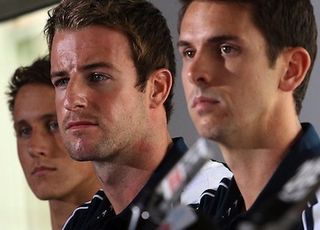 investigation into drug use and bullying by swimmers at the London Games.  The AOC on Friday said Walker would immediately begin investigating the use of Stilnox by members of the men's freestyle relay team as well as other misbehavior."  The Herald Sun posts "Moment of truth looms for disgraced relay team.  AUSTRALIA'S shamed relay swim team are set to learn their fate in meetings next week with swimming's Integrity Panel and an investigator from the Australian Olympic Committee."

Lane 4 - Gawker posts "Booting a Bookworm Off the Treadmill.  Is your gym an Olympic Training Center? Are you a professional runner who is unable to train because some retired swimmer from the 1952 Helsinki Olympics is hogging the only treadmill? Because that is the only scenario in which it would be appropriate for one gym member to complain to management about another gym member making use of the equipment they have paid to use."

Lane 6 - Daily Breeze posts "Los Angeles throws its hat in the ring for 2024 Olympics.  Los Angeles wants the 2024 Olympic Games.  Mayor Antonio Villaraigosa informed the United States Olympic Committee on Thursday that the city is interested in hosting the Olympics for a third time. L.A. previously hosted the 1932 and 1984 games.  Last month, the USOC sent a letter to at least 30 cities gauging their interest in hosting the games. Los Angeles is believed to be the first city to throw its hat in the ring."

Lane 8 - Today posts "Surf's up: Athletic beach gear rides the designer wave.  It seems the same goes for fashion, where designers have been dipping their toes into surfing-inspired apparel for the last two seasons. Michael Kors, Alexander Wang and Cynthia Rowley have each infused their recent runway collections with neoprene materials, neon-colored zippers and other cheeky surfer girl details.  But the trend seems to have hit an all-time high with actual surf apparel and gear hitting stores, items which were once solely reserved for sporting retailers — and which often came in dull, basic monochromatic styles."