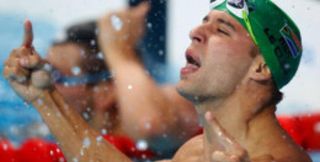 in Adelaide but the challengers have arrived for the second 100m freestyle spot, starting with rejuvenated veteran Matt Abood."

Lane 3 - iOL posts "One shot to make a splash. South African swimmers will get only one shot at qualifying for the Rio Olympic Games and that’s at the SA Swimming Championships and Olympic trials, starting today at the Kings Park Aquatics Centre in Durban. Chad Le Clos will be the main attraction at the national championships-cum-Olympic trials in Durban this week as he attempts to cement his place in the team for the Rio Games."

Lane 5 - The Japan Times posts "Kitajima makes retirement official, ending illustrious career. For more than a decade, Kosuke Kitajima competed at the highest levels of the swimming world. Now that he’s jumped in the pool for the last time, the battles he had against the world’s other top swimmers is something the Japanese superstar says he will genuinely miss."

Lane 7 - TrueSport posts "Elizabeth Beisel Plays This or That."

Lane 8 - CBC posts "Swimming 101: The story behind what you see at an Olympic pool."