Lane 1 - BBC posts "Michael Jamieson: Swimmer 'leaning towards' retirement. Olympic 2012 silver medallist Michael Jamieson admits he is "leaning towards" retirement from swimming, but will decide his future in the coming weeks. The 27-year-old was contemplating life outside the sport while working for the media at the Olympic Games in Rio." 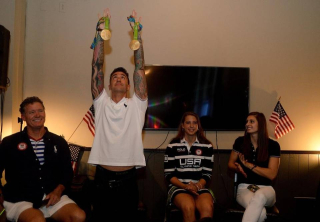 Lane 4 - BuzzFeed posts "How Katie Ledecky Stacks Up Against Male Swimmers. The swimming phenomenon was the standout performer in Rio, and probably isn’t yet at the peak of her powers."

Lane 5 - Greatest posts "Missy Franklin's Disappointing Olympics Is Actually the Most Relatable Story From Rio. On paper, Franklin tanked. She missed the finals in both of her individual events (finishing last and second-to-last in her semifinal heats). She isn't coming home empty-handed—the 4-by-200 meter freestyle relay team she was a part of went on to win gold. Still, this was nowhere near the Olympics Franklin dreamed of."

Lane 6 - The Charlotte Observer posts "Charlotte swimmers welcomed back from Rio Olympics. The Rio Olympics were David Marsh’s fourth as a swim coach, and his first time as head coach of the U.S. women swimmers. But for Marsh, who lives in Davidson, Brazil was extra special. Eight U.S. medals came out of SwimMac’s Team Elite, the team that trained in Charlotte and included athletes like Anthony Ervin, Katie Meili and Kathleen Baker, all of whom were greeted by family, friends and fans Sunday at a dinner in Cornelius."

Lane 8 - Derby Telegraph posts "Rebecca Adlington to give children swimming lessons after returning from Rio Olympics/ Inspired to jump into the pool after watching the Rio Olympics? The good news is, an Olympic champion is planning to pass on her tips to kids in the swimming pool. After the success of Team GB in the Olympics, including City of Derby swimmer Adam Peaty's gold and silver medals, former champion Rebecca Adlington will be in Burton passing on helpful swimming tips to youngsters."