Dive Two - LA Times posts "Sammy Lee, diver who became first Asian American to win Olympic medal, dies at 96. In a Facebook post Saturday announcing Lee’s death, his daughter-in-law, Gina Lee, described him as a “true giant, a fearless leader, a magnificent and loving family man and a hero amongst the Olympic and Medical world....he dove into our hearts and will be truly missed.”

Dive Four - NY Times posts "Sammy Lee, First Asian-American to Earn Olympic Gold. Dr. Lee won a gold medal in 10-meter platform diving and a bronze in 3-meter springboard diving at the 1948 Olympics in London, and a gold in platform diving at the 1952 Olympics in Helsinki, Finland. He also won three national diving championships as a collegian in the 1940s and was named America’s outstanding amateur athlete of 1953 by the Amateur Athletic Union."

Lane 3 - Sports Illustrated Kids posts "Stars Appear at Swimming's Golden Goggle Awards. Tall, muscular swimmers walked down a red carpet in New York City, posing for photos and speaking with reporters. The week of Thanksgiving, the best swimmers in the country — part of the winningest U.S. Olympic swim team in history — gathered for the Golden Goggles Awards and also to give back to their swimming community by raising money for the USA Swimming Foundation."

Posted at 10:49 AM in Diving, In Swimming News, Olympics, Other Swim Stuff | Permalink | Comments (0)

It’s really exciting to be talking about getting kids involved in sports, and I’ve personally found that there's a load of amazing content around motivational tips and tricks and keeping fit online. I love working hard and setting goals, so I think it’s important to encourage kids to do the same - and to try their best at everything that they do. I’ve put together a playlist on the YouTube Kids App to help encourage and inspire children to get active, especially in the lead up to the 2016 Olympics. Let’s celebrate sport! Be sure to check out the playlist, here:https://goo.gl/FYEegb

Lane 4 - AJC posts "Olympian and hall of famer reaches back to get kids in the pool. Maritza Correia McClendon won a silver medal in swimming in the 2004 Olympics in Athens. When she is not wearing the Red, White and Blue (or the Red & Black of UGA in the pool, you can find her in Sigma Gamma Rho's Blue and Gold. McClendon was recently inducted into the Georgia Aquatics Hall of Fame and was placed in the University of Georgia’s Circle of Honor."

Lane 6 - MinnPost has "Why Minnesota is the center of the swimming world — at least for a weekend."

Back On Board: Greg Louganis – Mentoring (HBO)

Greg Louganis discusses being moody and hanging out with Soviet divers. Back On Board: Greg Louganis debuts Tues., August 4 at 10pm on HBO.

Lane 1 - Thurston Talk posts "Amy Murry – Massage Therapist on Deck for U.S. Olympic Team. Amy Murry’s love for swimming and passion for her profession as a massage therapist took her to a very unlikely place in December. For 10 days, she was in Doha, Qatar, working at the FINA World Swimming Championship where the United States was one of 170 competing countries."

Lane 2 - The Australian posts "1500m prospect Mack Horton no slouch over sprint distance. WITHOUT any fuss at all, world junior 1500m champion Mack Horton joined one of his sport’s most exclusive clubs last month. One that boasts just a handful of members but excludes the likes of dual Olympic champion Grant Hackett."

Lane 4 - The Desert Sun posts "Greg Louganis film casts net for new audience. Louganis recently chatted with The Desert Sun about the differences between the two films and how he was affected watching “Back on Board.”

Lane 1 - 9MSN posts "AOC to fight midnight swim in Rio. Australian Olympic Committee president John Coates will fight the "unreasonable" proposal to hold some of the swimming finals at the 2016 Rio Games late at night. Due to pressure from American TV networks, it has been planned to begin the final sessions at 10pm local time, meaning some gold medals would be decided after midnight."

Lane 3 - ioL Sport posts "Chad loses teeth, not his looks. Swim sensation Chad le Clos caused a stir when he posted pictures on social networking site Instagram of his head bandaged, along with this cryptic message: “Successful op, thanks for all the support. Very painful recovery ahead.”

Well, they can rest assured he remains as handsome as ever. As for the surgery, it was nothing too dramatic. He had his wisdom teeth removed this week, his father, Bert, revealed with a chuckle."

Lane 4 - USA Swimming posts "CATCHING UP WITH BRENDAN HANSEN. Brendan Hansen is well aware of the definition of insanity – doing the same thing the same way over and over but expecting a different outcome. He knows it well because he’s lived it at times in the past when it came to his training. Now, as the general manager and head swimming coach at the soon-to-be-Christened Austin Aquatics and Sports Academy in his adopted Texas hometown, he intends to change things up and break the “insanity” cycle with his group of swimmers."

Lane 5 - The Economist posts "Free riding in swimming. Take your time. In an article published in the European Economic Review last year, Michael Neugart, of the Technical University of Darmstadt, and Matteo Richiardi, of the University of Torino, analysed data on 7,000 major swimming competitions held between 1972 and 2009. The huge trove of data allowed the researchers to compare the splits of swimmers who took part both in the individual and relay races in the same competition and isolate the causes of their performance."

Posted at 10:43 AM in Diving, In Swimming News, Olympics, Other Swim Stuff | Permalink | Comments (0)

Lane 1 - The Race Club posts (w/video) "Swimming Workouts — Dryland Stretching Exercises. Having a good dryland training program in your swimming workouts will work towards an increase in flexibility and improvement in strength especially in the smaller muscles that help achieve a more streamline shape in the water."

pool and gave her a unique opportunity."

Lane 4 - The National posts "Barcelona based Sabine Hazboun ‘happy to be here with other Palestinian people’ at Asian Games. Palestinian Olympic swimmer Sabine Hazboun is lonely living and training in Spain after she was forced to leave Bethlehem where a crumbling swimming pool held back her times. The 20-year-old, enrolled at a Barcelona sports institute for the past three years, told AFP she is delighted to be back amongst her compatriots at the Asian Games in South Korea." 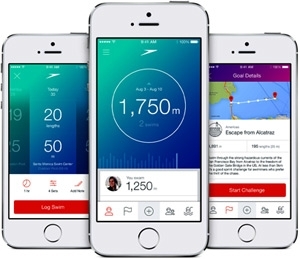 at the 17th Asian Games, describing it as “ugly”. “The Chinese let their anger out tonight,” he is heard as saying on a Chinese-language audio passed to AFP. “Honestly speaking, the Japanese national anthem sounds ugly.” Japanese rival Kosuke Hagino, who ruffled Sun’s feathers with a shock 200m victory last weekend, gave a measured response when asked for his thoughts.  “I didn’t hear what he said so it’s hard to comment,” he said. “But first and foremost we’re all athletes and we have to respect each other. We also have to show human values so hopefully we can continue to compete in that atmosphere.”

Lane 6 - Media Post has "Hello Design Helps Speedo Expand Beyond The Pool. Swimmers tend to be tech-savvy. They use gadgets to track their laps and analyze their stokes. Now, Speedo and creative agency Hello Design are introducing Speedo Fit, an app designed to motivate and empower fitness swimmers. repositioning to change the perception that Speedo is just a fitness brand. Still, the brand continues to utilize traditional tactics, most notably by supporting top-level athletes."