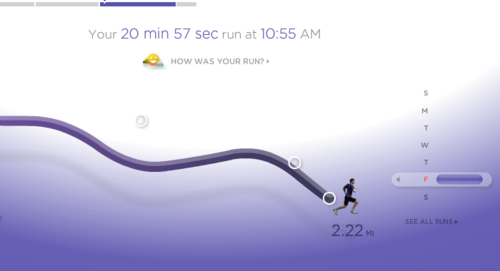 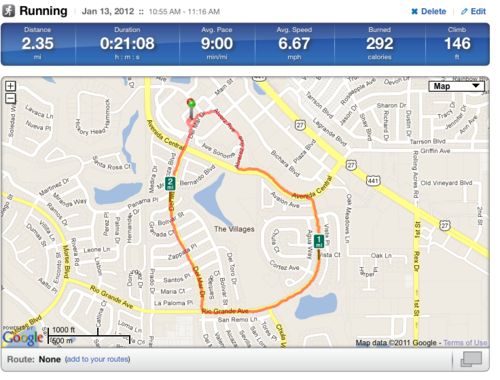 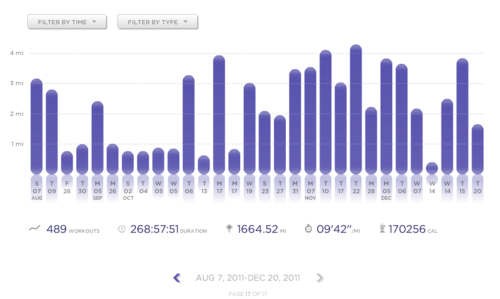 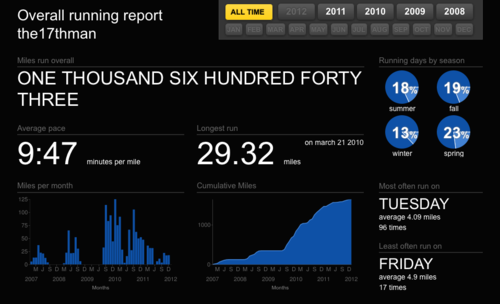 2 Hour Swim Day!  Wahoo!  Feels like ages since the last time I had a Sunday to just swim.  Since I don't have anything to do today I was able to get in some extra swim time.  The workout via emial…

And that was it…so 4300 yards if my math is correct in 2 hours.  Not bad.  Need more of these Sunday workouts.  Glad I have the whole month to swim on Sundays.  Well as of now.

Holy Crap I'm behind my Go The Distance Goal for 2012 and it's only the second week.  Gotta get some more swim time in this week!  Need to bank some yards now in case work gets in the way later this year. 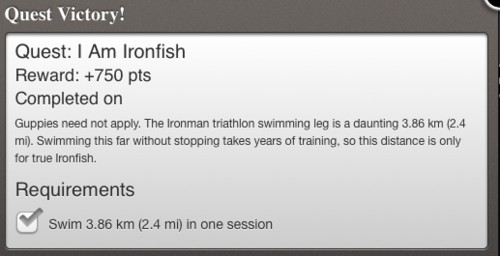 At least by logging this workout in over at Fitocracy I got a new Victory!  I Am Ironfish!  Wahoo!

I had this plan to create my own little Tri Workout for this morning.  It included swimming at 7am, Group Ride (Spinning) at 9:30 then running the 6 miles home from the gym.  But with rain forecasted for today I changed my plan.  I set my alarm for 5am and after 15 minutes of debating if I wanted to get out of bed I got up.  I put on my running sneakers but remembered my right ankle still has a blister healing.  So I took off my right Zoot and put on my Mizuno. 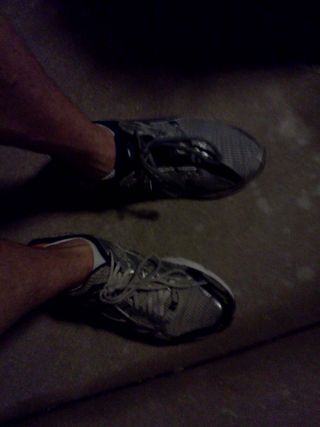 I figured no one was going to be out and about plus it was dark outside.  So off I was running.  While running I could see flashes of light in the sky.  So between that and the fact it took me a lot of time to actually get ready and out the door I only ran 3 miles. 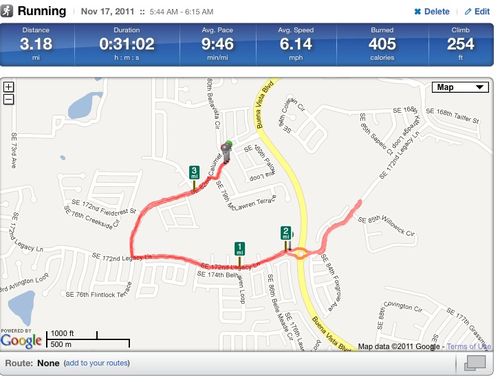 I was going to do the loop which is about the same distance I had ran but I felt safer with the lightening about to hit if I stayed on my side of the main road.  Plus I felt less exposed to being hit with the houses and all on this side of the road.

After the run I quickly changed and headed to the pool.  The rain had yet to start but the sky was an odd shade of red.  Almost pinkish.  That was an early warning of a pending storm.

The storm hit so fast with rain the the streets were flooded on the way home.  Glad I got my run out of the way.  Now I just gotta get my act together and head over to the 9:30 Group Ride / Spinning Class to finish my Easy Easy Short Short Tri Workout. 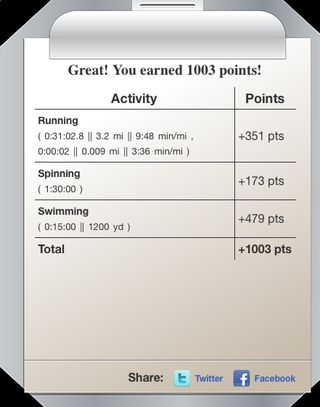 Earning me a whole bunch of things for Fitocracy.  Which the verdict is still out for me.  I like it but really do I need to keep track of everything somewhere else besides here?  But I do earn cool titles and badges...

Not that I understand what they mean.  They are meaningless I guess but sorta cool?

Yes, I am lost.  Oh well a good day of working out!

It's Monday.  I got out of the bed and swam.  Actually I woke up before my alarm.  I still wanted to stay in bed.  But I got out... 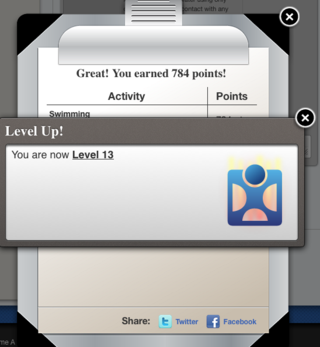 It was an okay workout.  Once my body woke up I was doing pretty well.  Not too bad for a Monday.  Yesterday after swimming I did Group Ride via the dvd class thingy.  I did one of the climb songs three times since I don't care for much of the music on the release I've been practicing with.

Oh and I'm at Level 13 on Fitocracy whatever that means.

Gimme All Your Swim

Gimme All Your Swim.  My swimming, running and life in general is powered by music.  The latest Madonna "Gimme All Your Love" fueled this mornings workout. 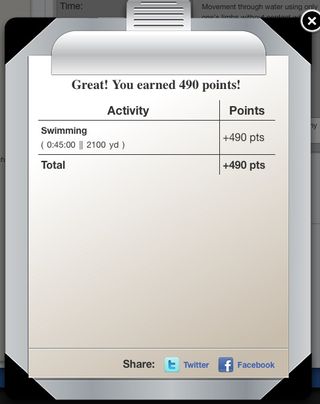 After I just did an easy 50 for 2,100 yards.  And that was it.  Today I'll get some gym time in with Group Power and maybe Group Kick.

Back To Work, I mean Back To Swim.

Let's see what did I swim today…

Hmm…lots of math involved in this workout.  Since it's already been an hour as I came home, ate breakfast and sat with my coffee watching Bill Clinton @clintonbook on Morning Joe I'll try to remember how I did.  My 500 was okay it was just to get on pace and I started off a bit slow but picked away to come in about a 6:40.  I'm guessing as I remember thinking that I was averaging a 1;20 base.  As for the 250's I tried at first to swim my 50 catch up drill then look a the clock to get a start time for the 200 swim.  Which worked on a 200 by 200 basis but by the 2nd 200 I was trying to remember the previous 200 and then the math fell apart.  So I took each 250 on it's own just picking up the pace.  And boy did I descend.  These are approximations but I was a 3:57, 3:46, 3:36 and a 3:27.  I'm doing some guessing as I'd touch the wall and turn to see the clock.  The last two 250's I knew that at the 200 mark I had to be at 2:30 at the very least to get faster.  I so need to get some money to get one of those Finis Swimsense watches to do my math for me.  Grrr…As you know already I love infographics about running and use Nike+ and Runkeeper.  I also use DailyMile to keep up with friends who run all over the USofA.  Now I'm logging all my workouts on yet another site call Fitocracy.  What can I say I over share... The cool thing about it is that it does upload my Runkeeper data.  Everything else is sorta a pain in the ass.  Only general classes are listed.  Now I know Swimsense data ca be uploaded to Runkeeper but don't know if that can then be uploaded to Fitocracy.  Maybe someone at Finis knows.  Anyways, I'm gonna try it out for a while.  More infographics will hopefully keep me motivated.

I then just did a very easy, slow and stop n' go 100 warm down.  So a 2,400 yard workout.  I gotta admit I was feeling yesterday's gym time in my shoulders and back.  Guess going up in weight has yet to pay off in the pool.