New York.  The Stonewall Swim is a fundraiser for Stonewall Community Foundation, a major contributor to LGBTQ charities throughout NYC."

Lane 3 - Daily Pilot posts "Salo has his teams in fast lane.  Former Irvine Novaquatics and Orange Coast College coach has USC swimming program back on the national stage.  Dave Salo is right where he belongs.  Right now, it's Japan, and later this week it'll be Shanghai, China for the 2011 FINA World Swimming Championships.  In a couple weeks when the world championships are over, he'll be back home in Southern California, ready to return to coaching the men's and women's swimming teams at USC after recently receiving a five-year contract extension from the school, continuing his tenure there that began in 2007." 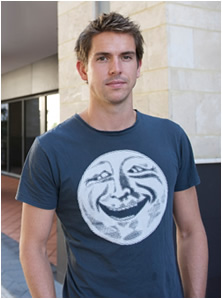 the first café for owners Eamon Sullivan and Laki Baker.  Friends who met on the set of Celebrity Masterchef [Eamon the ultimate winner of the title and Laki a Senior Producer for the show]. It was here the pair bonded over a mutual love of all things food and coffee.  Louis Baxters is the result of years of planning, recipe testing and an unwavering desire to bring together all that Eamon and Laki have learnt about food and coffee."

Lane 5 - The Daily Telegraph reports "Stephanie Rice, Geoff Huegill, Eamon Sullivan banned from Facebook and Twitter in China.  CHINA is taking the social network out of socialism, with Aussie swim stars blocked from using Facebook and Twitter at the world championships in Shanghai.  Facing tight government restrictions on internet access, prolific tweeters Stephanie Rice and Geoff Huegill won't be able to keep their thousands of followers updated during their bids to conquer the pool."

Lane 6 - From The Telegraph "Nick D'Arcy hit for damages after assaulting Simon Cowley at the Loft nightclub.  DRUNKEN assault on swimmer Simon Cowley cost Nick D'Arcy an Olympic spot and his reputation- now he has yet another price to pay for the nightclub king hit.  D'Arcy was yesterday ordered by Sydney's District Court to pay Cowley at least $180,942 in aggravated and compensatory damages for the assault which came as the pair celebrated the end of the Beijing Olympic trials in 2008."

Lane 7 - SI.com has "Warm conditions a factor for open water races.  Warm conditions will almost certainly be a factor for the open water swimming events in the world championships.  Swimming governing body FINA has arranged early morning start times for the races that start Tuesday, but the water temperature is still expected near the newly recommended limit of 88 degrees (31 Celsius) - part of a series of measures adopted following the death of American swimmer Fran Crippen in the United Arab Emirates last year."

Lane 8 - Cay Compas has "Peirsol made a splash with kids .  Swimming royalty visited Camana Bay and the kids - plus some adults - got the benefit of one of the best swimming coaches around when Olympic and world record holder Aaron Peirsol took clinics."

The Gay Games seems to have a new blog or at least I just found it today as they linked to me.  Thanks Guys!  Check out the Gay Games Blog HERE

The San Francisco Tsunami Swim Club's Synchro team was banned at this weeks FINA World Masters Championships.  The team was supposed to 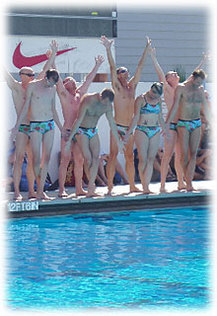 perform an exhibition which was cleared by local organizers of the World Championship until the international governing body that oversees the meet quashed those plans, following the lead of the International Olympic Committee, which designates synchronized swimming as a women's sport.

SF’s Tsunami is a gay & lesbian aquatics club made up of swimming, water polo and a synchro team.  The synchro team which is in it’s 4th season, has competed at national competitions, at the Gay Games and at the IGLA.

Looking for Gay Games Swimming Results?  Well look no futher, the Gay Games website has results posted HERE or you can download this the pdf here Download results-swimming-final-1.pdf

Long Beach Grunions Pink Flamingo in a series of short You Tube videos...

Pink Flamingo, It's Me

Oy!  Here it is...me in the warmup to Pink Flamingo. 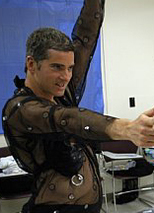 I don't know who or what teams these You Tube videos are of but they are from the swimming during the Chicago Gay Games.  The problem with swimming at this end of the pool was that the T painted in the bottom of the water dips as the bulk head splitting the 50 meter pool into two 25 meter pools is at the beginining of the deep end.  So when you are swimming and approaching the flip turn you have an optical illusion that you are closer to the bulk head then you actually are.  Here are the videos try and watch the starts, turns and streamlines... 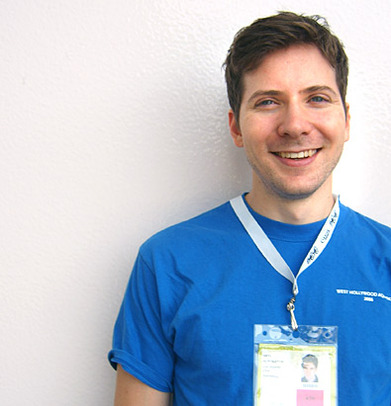 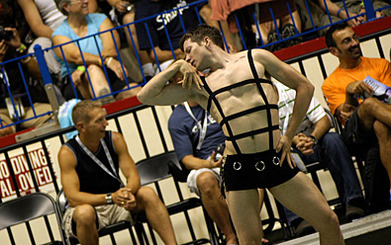 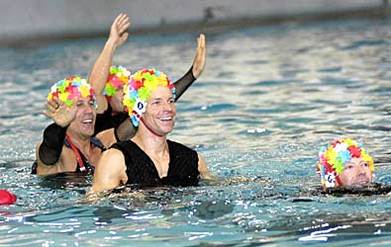 Me In All Out Pink Flamingo! 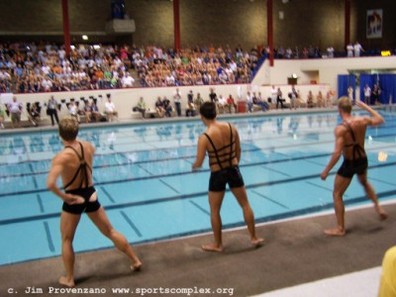 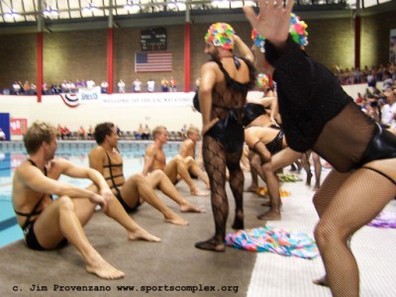