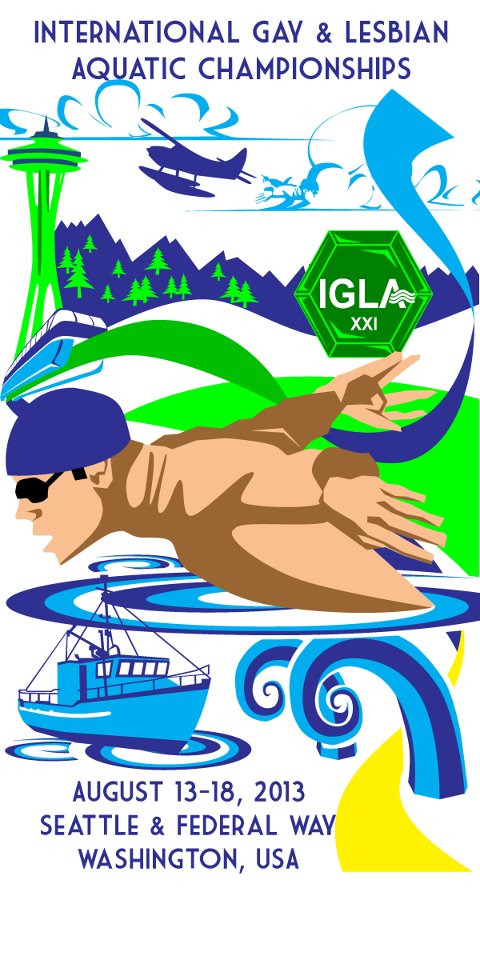 Lane 1 - The Courier posts "Revived Stephanie Rice back on track after Quade Cooper break-up.  STEPHANIE Rice has declared her life is finally on track after a tumultuous period in and out of the pool.  The triple Olympic champion candidly spoke about minor shoulder surgery, why she chose to break off her relationship with Wallaby rugby bad boy Quade Cooper, and reports she would retire after London."

Lane 2 - The Daily Telegraph posts "Eamon Sullivan nearly drowned as a toddler, now teaches kids about water safety.  HE is one of the world's top swimmers with a real chance of 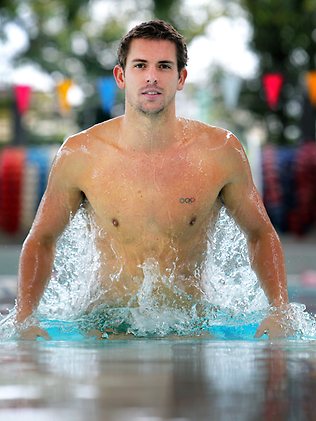 winning gold at the London Oympics later this year.  But Eamon Sullivan could so easily have become just another drowning statistic when, as a toddler, he accidentally rode his bike into his family's backyard pool.  Sullivan, who donated his $50,000 Celebrity MasterChef winnings to Royal Life Saving, supports The Daily Telegraph's campaign to have certified CPR training in all schools and said water safety and swimming lessons were crucial."

Lane 3 - We Are Austin has (w/video) "Texas Ex Brendan Hansen on the comeback trail.  In the swimming world, it takes a lot to make a splash.  Right now, comeback stories on the pool deck are as common as goggles and speedos.  Brendan Hansen is the exception.  or Hansen, it took stepping away from the sport and removing his goggles in order to clearly see what's truly in the water."  More from We Are Austin with "Adam's Blog: Perspective in the Pool.  Even Kim Kardashian and Kris Humphries think Brendan Hanson's retirement was brief.  The Texas Ex hung up his goggles after the 2008 Olympics.  However, less than three years after his final race (the 400 medley relay in which Michael Phelps won his 8th gold medal), Hansen was back in the pool.  But he dove back in with an entirely different attitude."

Lane 4 - Reuters posts "Swimming-Japan unveil 'new Kitajima' for London Olympics.   Japan have unveiled 17-year-old swimmer Akihiro Yamaguchi, labelling him the 'next Kosuke Kitajima' and predicting he could make a big splash at this year's London Olympics.  The raw teen, who has won a world junior title in the 200 metres breaststroke, has even bolder targets for London, telling the Nikkan Sports newspaper on Sunday: "I plan to win gold."  Like his hero Kitajima, who stormed to the 100 and 200 breaststroke double at the 2004 Athens Olympics and the 2008 Beijing Games, Yamaguchi is not short of self-belief." 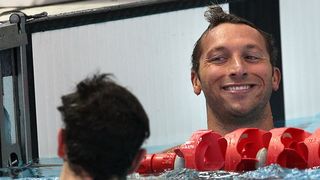 Lane 5 - The Sydney Morning Herald posts "Thorpe shows some promise in comeback bid.  Nearly a year after announcing he was coming out of retirement, Ian Thorpe now has two months to get his comeback right.  Thorpe flies back to his training base in Switzerland on Tuesday via a few days in the sun in Tenerife to put the final touches on his hurried campaign to make an impression at Australia's Olympic selection trials in March.  Even he conceded he might have left his run too late when he failed to make the final of the 100m freestyle at the Victorian state swimming championships on Friday, but his performance in the 200m on Saturday gave him, and national head coach Leigh Nugent, some hope."

Lane 6 - Omaha.com posts "Swim Trials seek even bigger splash.  Omaha made a huge splash in hosting the 2008 meet. Four years later, the fast lane to the Olympics once again runs through Omaha, as the Trials for the 2012 London Games come to the CenturyLink Center June 25 to July 2.  Now that the calendar has turned to the Olympic year, local organizers and USA Swimming say they're working to make this year's meet even better.  Officials with USA Swimming and the Omaha Sports Commission, the event's local host, are confident the crowds will be bigger, too. Ticket sales are running a little ahead of 2008, when the meet drew a record 160,003 over eight days.  Once again, the competition figures to feature some compelling story lines."

Lane 7 - SF Luxe posts "Nathan Adrian: Breaking Down and Building Up – USA Swimming.  Even though he doesn’t suffer through the expectations, Nathan Adrian acknowledges they exist.  When Gary Hall Jr. baptized him as the future of U.S. sprinting at the 2008 Olympic Trials – where the Seattle native made the first of what should be several Olympic teams – Adrian was branded…but in a good way.  Ever since, he’s tried to live up to his mentor’s prognostication and admits it hasn’t always been easy – and he still has work to do to reach his own personal goals."

Lane 8 - Discovery posts "Underwater City: A Lifesaver or Titanic Failure?  When the idea emerged in 2008, environmentalists balked. So did reasonable people everywhere. Dutch architect Moshé Zwarts suggested draining Amsterdam's canals, building an enormous parking and entertainment complex under the city, and then refilling the canals. Presto! More space!  Granted, Amsterdam did -- and does -- have little space to spare, but the project would have cost an estimated $14.4 billion. Not to mention the tiny problem of exhaust buildup. And logistics. Mercifully the idea was back-burnered. Zwarts' architectural firm returned to making futuristic designs for structures like bridges, bus stations and viaducts."

I apologize for any formatting issues as Typepad is having issues with Firefox for the last few days in posting and various behind the scenes stuff.  - Joel

Me, Maybe, I Think

It looks like someone my built, hair, goggles, suit and that odd stance of mine.  Also part of the same series of photos that I found myself in this suit on the bench.  So I guess it is me. More Photos of Me 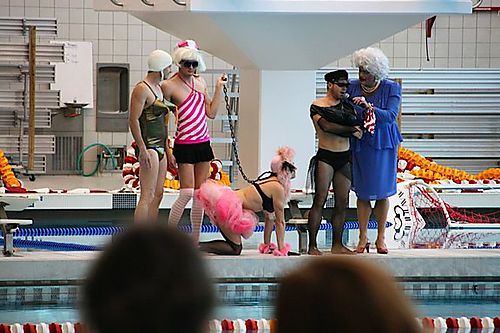 Trying to stay in character is a bitch.  You try walking on your hands on knees on a bulkhead! 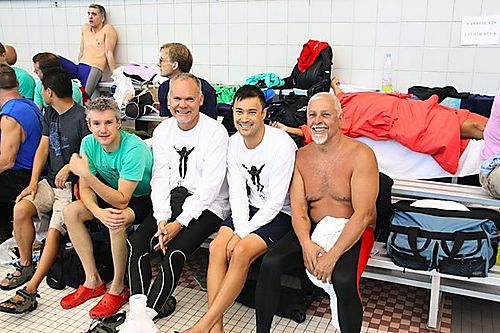 I'm hiding in the back lost in my own world.  In front are my teammates smiling it up.  I'm the very back row leaning against the wall. 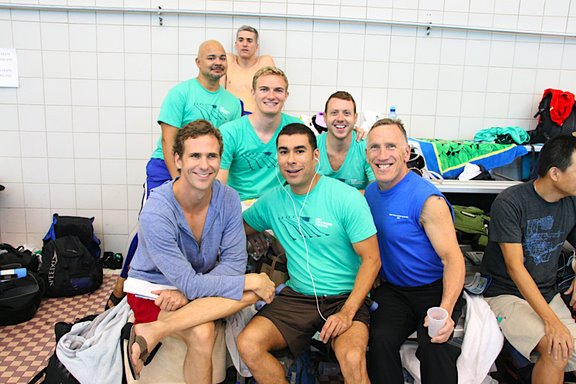 Once again i'm trying to act aloof as my mates smile it up for the camera.

here are some photos from MetroWeekly 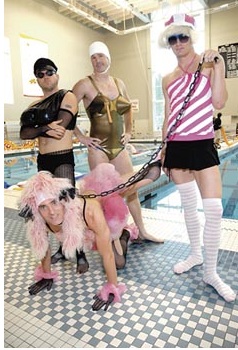 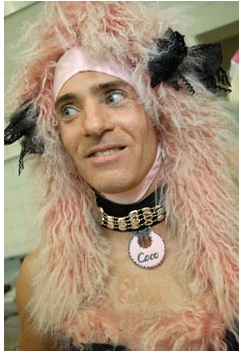 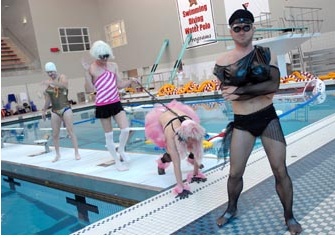 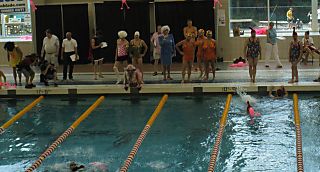 Okay if you look to the right you see Coco the poodle on deck ready to jump in water. 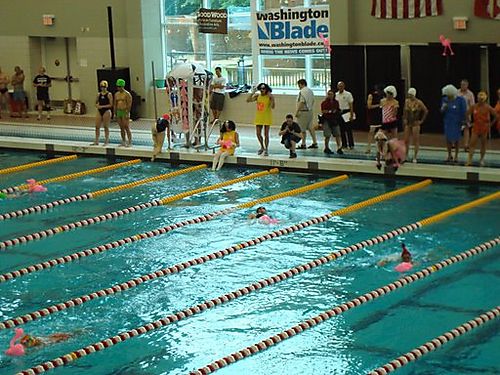 thanks to Orien's Picasa Web Album

Riding In The Car With Teammates

After swimming a few of us were offered a ride back to our hotels by one of the locals.  Thank you!  Everyone was so nice in DC!  I'm in the middle. 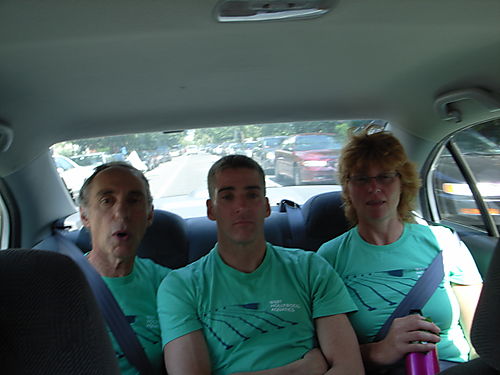 Gaywired.com has a quick little article on this weekends IGLA.  The article covers the various winners of teams in both swimming and water polo.  The main highlights are below: 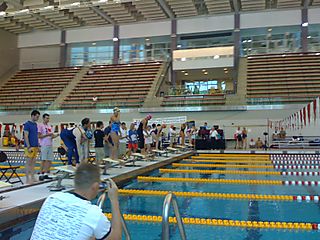 Mills, who raced for the Arizona Masters team, competed in the 45-49 age bracket and broke the short course worlds records for the 200 IM, the 100 breaststroke and the 200 breaststroke.

In addition to the six FINA records, 16 short course USMS records were shattered and an impressive 130 IGLA records fell. According to WonKee Moon, the meet’s Tournament Director, one of the most impressive and emotional races of the meet came when Margaret Camp set the IGLA record in the 50 mete freestyle. Camp touched the wall with a time of 1:48.20, and at 88 years of age, she was the oldest competitor in this year’s meet and set the record in her age group.

You can read the full article HERE.  Note the picture in the article is from QUAC's Swim & Ski Weekend, I think.  Just thought that was sorta funny that the article didn't use an actual picture from the weekend.  The picture in my post is of Karlyn Pipes-Nelson.  She is wearing a pink cap in the middle of the picture.   I bought one of her DVD's a few years ago at Regionals after we chatted a bit in the warm down pool.  We briefly said hi to each this weekend.  I love watching her swim as she is just a machine in the water.  She just keeps going and going with no signs of tiring.

Gaysports also has the same post as it's party of Gaywired.  You can read it HERE 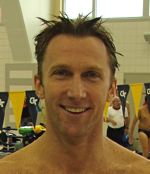 The Gay Atlanta Sports Blog has a post regarding the Atlanta Trouts IGLA swims.  It doesn't say much but it's the only IGLA blog post I've found so far.  Check it out HERE.

I didn't take a whole lot of pictures this past weekend.  I left that for others.  You can check out my team's blog for lots of swim photos.  The widget for that blog is to the right.  Here is a slideshow of the pictures that I did take which are mostly touristy shots of DC.