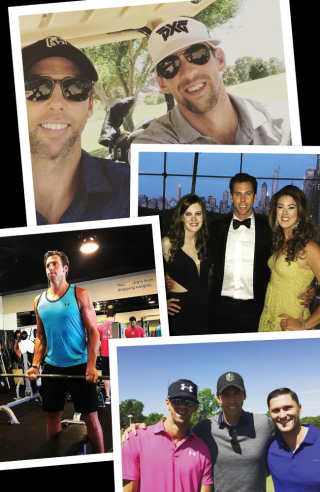 Lane 1 - NBC Sports posts "Ryan Lochte appears to change hair color.  Ryan Lochte won’t look much different in the pool in Rio, but it looks like he just made a big change that will be apparent out of the water. Lochte’s hair color is no longer brown, by the looks of his social media."

Lane 3 - ESPN posts "James Magnussen says life lessons all part of 'crazy' London Olympics.  In his first column for ESPN, Australian Olympian James Magnussen reflects on the experiences of the London Olympics, including his silver medal in the 100m freestyle and the Stilnox saga that brought into question the culture of the swim team."

Lane 6 - The Hindu posts "Sun has a daunting task. The 24-year-old, who will compete in the 200m, 400m and 1500m freestyle events in his third Olympics, is likely to face the toughest competition. Chinese swimmer Sun Yang will be under intense scrutiny when he hits the pool to defend his 400m and 1500m titles."

Lane 1 - Daily Times posts "WADA may appeal Sun’s three-month doping ban. The World Anti-Doping Agency (WADA) will review the reasons behind the three-month ban handed to Chinese Olympic swimming champion Sun Yang and decide whether to appeal the decision to the Court of Arbitration for Sport (CAS)."

Lane 2 - NY Times reviews "Touch the Wall (2014). There is a bit of “A Star Is Born” in “Touch the Wall,” a documentary that traces the diverging fortunes of two Olympic-level swimmers. We watch Kara Lynn Joyce, a four-time silver medalist, as she joins a team in Colorado, where she 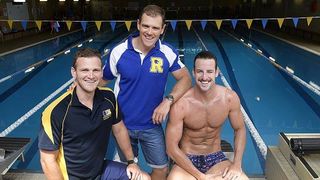 trains alongside Missy Franklin, then in high school."

Lane 4 - Just Jared Jr posts "Olympic Swimmer Missy Franklin Attends Docu-Film Premiere, Insists She's Not Famous. When asked what it’s like to be famous, Missy told the Denver Post, “I am not famous. No, I am not. I have gotten media attention. There is no fame involved.”

Lane 5 - BC posts "Cochrane’s consistency earns him seventh annual honour. Ryan Cochrane has been named Swimming Canada’s OMEGA Male Swimmer of the Year for the seventh straight time, as he continued his remarkably consistent run among the world’s swimming elite in 2014."

Lane 7 - Go Swim posts "Turns - Underwater Dolphin. Make the most out of every pushoff and start, great underwater dolphin kicks will change your entire potential in the sport or swimming."

SwimOutlet.com’s awesome Doorbuster deals are now available, just in time for your weekend holiday shopping. These guys have almost 600 gift ideas at terrific prices, so check it out: http://www.swimoutlet.com/2014-black-friday-doorbusters-c8846

Posted at 06:00 AM in In Swimming News, James Magnussen, Olympics, Other Swim Stuff | Permalink | Comments (0)

Lane 2 - The Race Club posts "Swimisodes - Freestyle - Head Position. Many freestylers swim with their heads too high. In a crowded swimming pool, swimmers often look forward, hoping to avoid a collision with one of their teammates. These defensive swimming techniques create a bad habit that slows them down. In this Swimisodes, world record holder and Olympic champ Roland Schoeman and Open Water Swimmer Lexie Kelly show how head elevation slows their swimming techniques while Japanese champion, Junya Koga, swims freestyle the way we teach at The Race Club almost effortlessly with his head in the correct swimming technique. http://shop.theraceclub.com/store/tra..."

Lane 3 - Fox Sports posts "James Magnussen at loggerheads with Swimming Australia over his choice of coaches. JAMES Magnussen’s war with Swimming Australia has gone public after the sport’s bosses rubbished the world champion’s decision to ignore their advice and choose little known swim coaches Mitch and Lach Falvey to guide his pursuit of 2016 Rio Olympic gold."

Lane 5 - Daily Record posts "Perth swimmer Stephen Milne has "the potential to medal at Rio de Janeiro". Perth swim star Stephen Milne splashed into the spotlight earlier this year following a glittering performance at the Commonwealth Games. And the former Perth Academy pupil recently received a funding boost from British Swimming after being picked out as a potential medal winner at the 2016 Olympic Games in Rio de Janeiro."

Lane 6 - Gulf Times posts "Lochte, Hosszu, Gyurta confirm for FINA worlds. After a record number of athletes registered to compete at the 12th FINA World Swimming Championships, organisers today confirmed part of the star-studded line-up of swimmers that will compete in Doha from December 3-7."

Lane 7 - Chaîne de Swim For Life Brussels posts "S4L FAQ English. You want to register for Swim for Life but still have some questions? Take a look here :)"

Lane 8 - Cuban News Agency posts "Cuban Swimmer Has Outstanding performance in Veracruz Games. Cuban Elisbet Gamez won the bronze medal in the swimming event of women's 200 meter freestyle at the Central American and Caribbean Games Veracruz 2014, to give the Caribbean nation its second medal in the sport."

Lane 1 - Reach For The Wall posts "Bruce Gemmell honored as ASCA Coach of the Year. For the second straight year, Nation’s Capital Swim Club Coach Bruce Gemmell was recognized for his role in the engineering the stunning success of two-time All-Met Swimmer of the Year Katie Ledecky during the 2013-14 season, as well as his work this summer coaching his son, Andrew Gemmell, to open water gold at the Pan Pacific Championships."

Lane 5 - The Sydney Morning Herald posts "Magnussen splits with coach ahead of Rio. Australian swimming star James Magnussen says he's decided to split with long-time coach Brant Best to reinvigorate himself ahead of the 2016 Olympic Games."

Lane 6 - Daily Mail posts "Is that really necessary? Michael Klim wears a hairnet to inspect his cosmetics range in a factory ... even though he's bald. He’s known for his distinct lack of hair. But Michael Klim was still sure to wear a hairnet when he visited the factory where his skin and body care range, Milk & Co, is manufactured on Tuesday."

Lane 1 - Charlotte Observer posts "Swimmer from Zimbabwe comes to Charlotte to revive her Olympic dreams. In Zimbabwe, Kirsty Coventry is Michael Phelps. In Charlotte, where she moved last month with her husband, Coventry is an anonymous 30-year-old woman. Put her in a pool, though, and you start to understand why Coventry is a worldwide swimming star hoping for one last triumph after a disappointing Olympic experience in 2012."

Lane 2 - CBS News posts "Paralyzed Olympic swimmer Amy Van Dyken walks after ATV crash. Championship swimmer Amy Van Dyken-Rouen walks for the first time since the June crash that left her paralyzed from the waist down. Assisted by a walker and a bionic device called an "exoskeleton," she is re-learning how to walk. Norah O'Donnell reports."

Lane 3 - The Guardian posts "Rebecca Adlington: 'It's bizarre stepping into a world where I'm just a girl'. She was the Mansfield girl who won double Olympic gold in Beijing. But since retiring last year aged 23, swimmer Rebecca Adlington has left the athlete's life – and body – behind. On the eve of her wedding, she talks about celebrity, being trolled on Twitter – and cutting down on Weetabix."

Lane 4 - Herald Sun posts "James Magnussen to give injured back plenty of rest and focus on swimming at 2016 Rio Olympics. WORLD champion James Magnussen will take a long-term view of his debilitating back injury with the Australian sprint star to now make the Rio Olympics his priority as he weighs up the next move in his battle with a bulging disc."

Lane 6 - Gulf Times posts "Le Clos, Mellouli, Schoeman confirmed for Doha event. A thrilling start to the FINA Mastbank World Cup is all but confirmed with yesterday’s announcement of part of the line-up for the Doha meet. Amongst the world’s top swimmers that will compete in the first of seven meets of the FINA Swimming World Cup are men’s Olympic champion Chad Le Clos, who will be racing to defend the overall male World Cup Champion title, three-time Olympic medalist Oussama Mellouli and four-time Olympian from South Africa, Roland Schoeman." 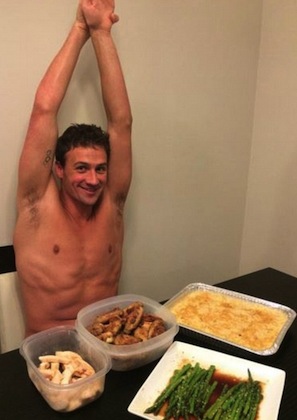 shares a picture of his Olympic swimmer's diet. he Olympic swimmer, who turns 30 at the beginning of August, tweeted an image of his typical meal yesterday - containing 10,000 calories. '#Streamlining in preparation for my 10,000 calories. Let’s see your best pose. @swimtoday #funnestsport,' tweeted Mr Lochte, a self-confessed former fast food addict."

Lane 4 - Women's Day posts "Prince George: future Olympic Swimmer? A proud Duchess Catherine has told athletes at the Commonwealth Games that she has taken Prince George swimming and that he loves nothing more than splashing around in  the water."

Lane 5 - Edinburgh News posts "Swimmer Daniel Wallace fixes his sights on Rio Olympics. Daniel Wallace hopes his hat-trick of Glasgow 2014 medals can propel him towards sporting superstardom. The 21-year-old from Edinburgh followed up gold in the 400 metres individual medley and 4x200m freestyle silver with another second-place finish in the 200m IM."

Lane 6 - Team USA posts "For Tracy Caulkins, 1984 Games Were Well Worth The Wait. Tracy Caulkins’ Olympic swimming dream began when she was a 9-year-old girl in Nashville, Tennessee, as she watched Mark Spitz fly to seven Olympic gold medals in Munich in 1972. Eight years later, the 1980 Olympic Games in Moscow were supposed to mark her time for Olympic glory, but the boycott put those dreams on hold."

Lane 7 - OC Register posts "Throwback Thursday: Remembering the 1984 Olympics. All eyes were focused on the athletes in Los Angeles and one Register photographer caught peak moments by improvising." 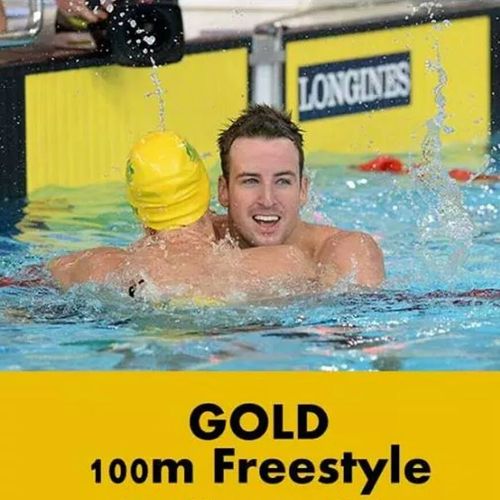 On Your Mark with James Magnussen 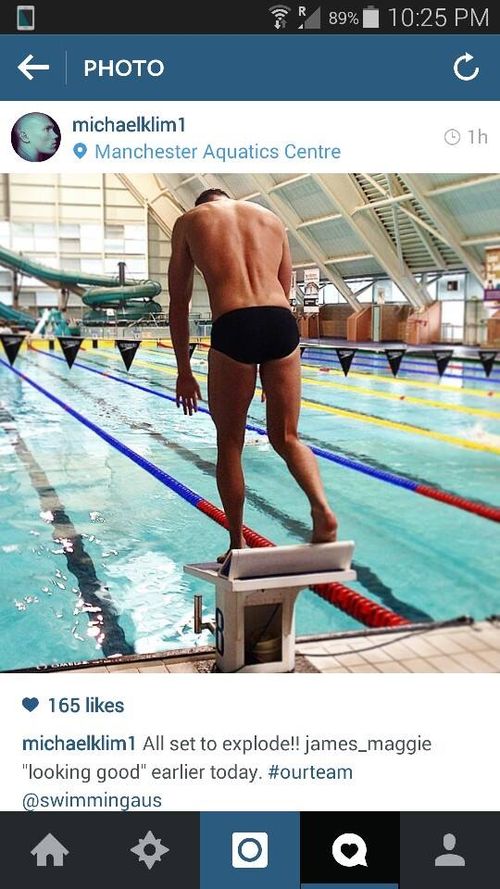 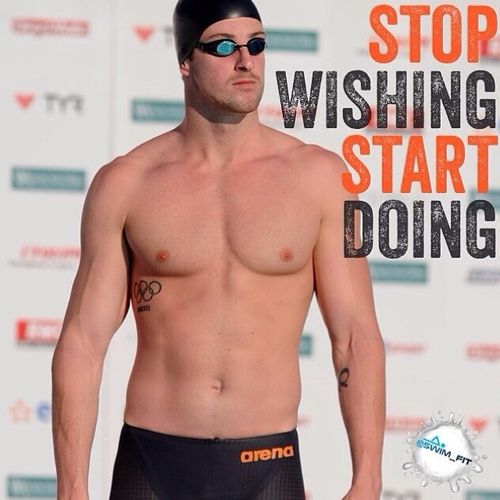