Ryan Lochte is one of the best swimmers of all time! We analyzed his freestyle and backstroke to help you improve your own technique! 🤓 Read the blog: http://bit.ly/3eRddJC

Lane 1 - Outside posts "Laura Val Has Never, Ever Met a Pool She Didn’t Like. The 65-year-old swimmer has set 355 world records. And she's still going."

Lane 3 - NBC Sports posts "Ryan Lochte returns to old coach. Lochte is moving back to the University of Florida to train under Gregg Troy, who guided him to 11 medals among the 2004, 2008 and 2012 Olympics."

Lane 1- NBC Sports posts "Ryan Lochte, with new coach, races in first meet since Olympics. Ryan Lochte is back in the competition pool. The 12-time Olympic medalist, suspended from USA Swimming and international meets through June, won a 200-yard individual medley at the U.S. Masters nationals in Riverside, Calif., on Friday. He also finished second in a 100-yard breaststroke."

Lane 2 - Republik Fitness Center posts "Olympic Series Swim Clinics with Charl Crous. At Fitrepublik, we are hosting the Olympic Series Swim Clinics on with Olympian Charl Crous. The coach will be in water demonstrating and focusing on the techniques, starts, turns and finishes. It is highly recommended for competitive swimmers as they get to see first-hand how Olympic Athletes practice for the racing season!"

Lane 3- GQ posts "The Real-Life Diet of Olympic Swimmer Ryan Murphy. Professional athletes don’t get to the top by accident. It takes superhuman 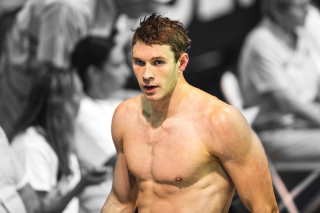 levels of time, dedication, and focus—and that includes paying attention to what they put in their bellies. In this series, GQ takes a look at what pro athletes in different sports eat on a daily basis to perform at their best."

Lane 4 - Herald Sun posts "Remember when: swimmer Craig Stevens stepped aside for Ian Thorpe in 400m ahead of Athens. IAN Thorpe declared he would only accept a place in the 400m freestyle at the Athens Olympics if Craig Stevens withdrew of his own accord. Thorpe wanted to know Stevens’ reasons for pulling out. Stevens, who received a shock Olympic 400m berth after Thorpe’s disqualification for a false start at the trials considered relinquishing his place to concentrate on his pet 1500m event and clear the path for Thorpe to defend his sole individual Olympic crown."

Lane 5 - MLive posts (w/video) "Under Armour features Rockford's Johnny Agar in new Michael Phelps ad. Becki Agar, who in March just wanted to help motivate her son in his on-going battle with cerebral palsy, ended up helping her son inspire a whole lot more. A video she created of her son, Johnny, next to Olympic great Michael Phelps reached new heights Friday when Under Armor representatives helped celebrate the inspiration of the 23-year-old and his father, Jeff. The two have been involved in a number of runs and triathlons over the years. The company's surprise gift? A TV spot of the video."

Lane 6 - Daily Mail posts "Adam Peaty stays ahead of the pack despite his rivals spying on him: 'A copy is never going to be as good as the original'. Adam Peaty won gold in the 100m breaststroke at the Rio Olympic Games . The Olympic champion took a complete break from the pool following Rio. Such is his dominance, others have been filming Peaty's style in the pool. Peaty's next goal is defending his titles at the World Championships in Budapest. Much has been made of Peaty's potential to swim under 56 seconds in his event."

Lane 8 - The Courier Mail posts "lympic greats call time on AOC chief John Coates. AUSTRALIA’S greatest Olympian, Dawn Fraser, has called time on the presidency of AOC boss John Coates a week out from the vote that could see him ousted after 27 years in the job."

As a truly iconic figure in the world of sports, Ryan has earned his status as one of history’s most recognizable names in swimming. With showstopping appearances in the last four Olympic Games, he remains the World Record holder in the 200 individual medley. In addition, his seven individual Olympic medals are second all-time in the sport of men’s swimming. Ryan has been named both American and World Swimmer of the Year twice in his career (2010 & 2011) and has a total of 70 medals in major international competitions including 45 first place finishes.

Ryan’s debut will be featured in TYR’s marketing campaign “Just Let Me Work,” and will provide fans with a glimpse into what motivates the decorated athlete moving forward.

In addition to his success in the pool, Ryan is incredibly focused on charity. He is the spokesperson for Parent Project Muscular Dystrophy (Duchenne), an illness that has personally impacted his family, as well as the Mac Crutchfield Foundation, an organization dedicated to raising money for drowning awareness.

“I am thrilled that I will be continuing my swimming career with TYR Sport,” began Ryan. “I still have so much more I want to accomplish and TYR offers the perfect platform to achieve those goals. I’ve always been very impressed with the quality of their gear and feel fortunate to be part of their family. I look forward to the next chapter.”

“TYR is incredibly excited to welcome Ryan Lochte to our family,” said Matt DiLorenzo, Chief Executive Officer of TYR Sport. “Through his work in the pool he has elevated the sport of swimming on a global scale. However, it is his humble and caring approach toward his fans that has proven truly commendable. As a company we stand behind Ryan, and look forward to seeing what he can achieve.”

About TYR
Named for TYR, the Norse god of warriors, our company is committed to cultivating a culture of greatness, both in and out of the water. Through vision and American ingenuity, we have become a brand synonymous with the athlete.

From the planning stages to the production floor, everything we do revolves around synthesizing creativity, experience and competition. For us, engineering the most advanced performance products is more than just a goal, it’s a requirement.

TYR Sport is proud to announce the signing of 12X Olympic Medalist Ryan Lochte to its roster of sponsored athletes. As a truly iconic figure in the world of sports, Ryan has earned his status as one of history’s most recognizable names in swimming. His debut will be featured in TYR’s marketing campaign “Just Let Me Work,” and will provide fans with a glimpse into what motivates the decorated athlete moving forward. Ryan joins an accomplished team of TYR sponsored swimmers including Olympic Gold Medalists Dana Vollmer, Matt Grevers, Cody Miller and Kelsi Worrell, as well as Olympians Jacob Pebley and Molly Hannis.

Lane 1 - Palmer College of Chiropractic posts "DR. KEVIN RINDAL: MY EXPERIENCE AS AN OLYMPIC TEAM CHIROPRACTOR. Kevin Rindal, D.C., CCSP®, Davenport ’06, served as the official chiropractor for the 40-member USA Swimming team at the recent Summer Olympics in Rio. “Earning the appointment as USA Swimming’s team-chiropractor at the Summer ’16 Olympics ranks as the greatest honor of my professional career, and it was an absolute privilege to serve our swimmers for over a month (during the training camps and the Olympic games) as a member of the medical support staff,” said Dr. Rindal, one of six chiropractors in his family, and the founder of InHealth Sports Injury and Performance in Seattle, where the practice team includes his brother, Curt Rindal, D.C., West ‘12."

Lane 2 - Morehouse College posts "OLYMPIC MEDALIST ENCOURAGES ALL STUDENTS TO LEARN HOW TO SWIM. More than 20 young swimmers waded in the water at the Archer Hall Swimming Pool this week to get lessons from an Olympiad. Olympic Medalist Maritza Correia, the first black woman to set an American record in swimming, took time to give individual tips to each child who signed up for the celebrity swim lesson at Morehouse College. She said part of her mission as an athlete is to share her love of swimming with children and others who may be fearful of getting in the water."

Lane 3 - NY Post has "Ryan Lochte turns down plea deal for lying about Rio ‘robbery’. Disgraced Olympic swimmer Ryan Lochte has turned down a plea deal with Brazilian prosecutors to drop criminal charges connected to his tall tale of a gunpoint robbery, according to a report."

Lane 4- Arena Water Instinct posts "Lap Swim for Beginners: Overcoming the Boredom of Repetition.  It’s true that swimming doesn’t offer the distraction of changing scenery or the satisfaction of seeing a distant destination grow closer, but lap swim doesn’t have to be monotonous."

Lane 2 - Page Six posts "Olympic swimmer recalls near-death drowning experience. When Jones’ mom took him for swimming lessons: “It took five different teachers to get comfortable. I started to learn at the YMCA, then [the Newark Swim Team] really cultivated my swimming skills.”

Lane 4 - TODAY posts "Joseph Schooling calls for better support for local athletes. “When I race, what’s on my chest? It’s not my name, it’s the Singapore flag. Do you think it’s fair my parents pay all this money and suffer for me to represent my country? That’s their decision to support me, there should be better support if a person is serious and competitive enough to change their lifestyle drastically to try to bring glory and honour to our country."

Lane 1 - CAL Alumni Associate posts "Steady Crawl: The Life of an Elite Swimmer Mom After the Olympics. In the afternoons, Dana Vollmer, 7-time Olympic medalist, takes her kid to the playground near their house in Danville. Sometimes people recognize them. But not usually. “It’s always the moms,” she says, who recognize her. Or more accurately recognize her and her 19-month-old son, Arlen, together."

Lane 2 - Turn To 10 posts (w/video) "Olympic swimmer Elizabeth Beisel jumps into role of coach. After 14 years of 24/7 training, two-time Olympic medalist Elizabeth Beisel finally has some time off. Following the Summer Games in Rio, she took a vacation to Thailand and Australia. Now, the 24-year-old Olympian is back home in the Ocean State with plenty of free time."

Lane 4 - US Weekly posts "Ryan Lochte’s Fiancee, Kayla Rae Reid, Reveals She Got a Botched Boob Job: ‘They Were Just Way Too Big for My Body’"