These year end numbers are not exact as I may not have logged every workout into my ongoing log totals.  But from what I have logged I have swam a total of 533,344 yards for 2009.  That is using a total of yards and meters and then having the log on the USMS website figure it all out for the Go The Distance login.

The year itself was an okay year for swimming.  Swam at the USMS SCY Championships and had an okay swim meet.  Had a few personal best times.  Had 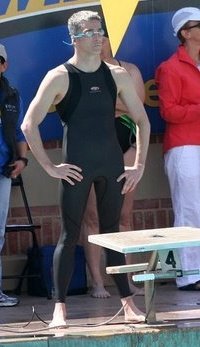 Then I sat out LCM season with no swim meets.  Not that I swam many meets in 2009 in any pool length.  I swam at 4 SCY and 2 SCM meets.  That is more then enough.

When SCM season rolled around I gotta admit my swim meet swimming started off pretty bad and kept on getting worse.  I swam a meet at UCLA and in my 100 back and 100 fly did some of my slowest swims ever.  I alsn my 1500 i did my 2nd fastest time but it was so far behind my best time that I wasn't happy.  My 400 free, 200 fly and 200 back were also not very fast times for me.  On the last day of the meet I finally got into my grove and did a personal best in the 800 free.  Guess 2009 was the year of the 800 free for me. It'll be a few months before any Top 10 times are released but looking up my rankings I have a few but those can and may change as meets are still being loaded into the USMS database.

Overall it was a good year.  As for 2010 and my goals you can read that post LINK that I typed up on my flight to Florida last week.

Sunday's workouts are always tough and today was tough.  Luckily the sun came out during practice giving this pale Irish guy some sun time.  I'm still sporting my Clovis tan and hope to keep it up.  June Gloom be damned!

And then I did another 50 easy.  I'm beat.  This was a tough workout.  Since I've been hit or miss with swimming since Nationals these last two workouts have kicked my ass.  Hopefully I'll be back in the swing of things pretty quickly.

My yardage was way down for the month compared to other months.  But tapering and 4 days at Nationals will do that.  Plus like I've said I have been hit or miss with attending workouts.  But tomorrow is a new month and I can't start training hard again.

It feels like I haven't swam in ages.  After SCY National's it's been hit or miss.  This week between Memorial Day's Pool Closure and No on 8 March I've been out of the pool.  I did swim for 60 minutes on Sunday but it was a disaster in the pool as I felt like crap.   Swam an easy lap swim on Tuesday so that doesn't count for much.  At least I've done a few trips to the gym for weights and spin classes to keep me active.

Once in the pool I was out of the gate right from the onset.  Which is not normal for me.  Usually I struggle with warm up and build from that.  Today I was strong and kept on going.

I can't remember if we did one short warm up set here.  We normally do but I forgot.

I figure I'll get one more swim practice in for the month of May.  Then it's a new month!  June.  Then it'll be July and my back to swim annviersay on the 5th.  5 years back to swimming on the 5th.  I grew up doing age group swimming and stopped when i was 16 in highschool.  I didn't swim a lap till after my 34th birthday.  So now it's approaching 5 years and somedays it feels like I am swimming for the first time again

I decided to get up and go swimming in order to get a swim out of the way.  Since the CA Court will be ruling at 10am on No on 8 / Gay Marriage it'll be a crazy day here in WeHo.  A rally is planned at 7pm tonight right in the pool area so I am so staying away from that.  I think I may even skip the 6pm spin class as it ends at 7pm.  I keep on remembering that after the election one rally moved into the streets causing traffic snarl.  At this point I guess everything hinges on the ruling.  But for me I decided get a workout in early and then if need be hunker down inside for the day.

I then did a 50 warmdown.  Chatted up with one of the elderly ladies who I adore.  So in less than an hour swim I got in 3000 yards.  During the freestyle swimming in the workout I kept thinking about my turns.  Trying to be tucked in a ball, pushing off on my back and then turning over.  As opposed to me just flipping my arms over and pushing off in a twisted sideways movement.  Since it's a new turn on the path to doing a correct fast turn I'm a bit wobbly.  I go way to deep off the wall.  It's going to take time.  During the backstroke I was working on my new technique.  Less bobbing and bouncing around.  Figure I have plenty of time to tweak my swimming and turning.

Last night I just couldn't sleep.   Maybe cuz' I slept in so much yesterday morning and add to the fact that I could hear someone walking upstairs all night.  So after a night of tossing and turning I gave up and headed to the gym pretty early this morning.  Which was nice as the gym was empty.  After 15 minutes of cardio to warm up I hit the weights.

Later on it was time to get in the pool.  The lack of sleep added with the fact that I ate a late breakfast but no lunch lead to a piss poor swim.  I actually go to the pool during lap swim and continued my friend Amy's introduction into the world of swimming.  I pretty much sat on deck the whole time getting some sun.  Which also wasn't a good thing to do before a swim workout.  I have up in the workout after an hour of swimming.

I decided to hit the 7pm swim workout which turned out to be a great idea as we only had 7 swimmers so we almost all had our own lane.  Gotta love that.  Friday night is a short 1 hour workout.  Quick and Easy!

We ran out of time so that was it.  (2450 yards + 50 warmdown for 2500 yards)  So the workout was a total of 2500 yards.  But it was quick sprints so I enjoyed it.  Plus I felt sorta sluggish tonight in the water.  Don't know if it was because I really haven't been swimming this week or the fact that I'm lifting more weights now.  Or maybe a combo of both.  I upped how much I'm lifting at the gym so that may be a factor is my sluggishness in the pool.  I just felt odd and it was hurting more than it should.

This morning I woke up before my alarm went off.  Actually an hour before it went off but was able to toss and turn for a bit before it was time to get up.  Since I felt pretty good I headed over to the swimming pool.  I am a still bit sore from Sunday afternoon's workout but it was worth swimming this morning.  Towards the end I felt some odd pain in the muscles of my arm.  I'm chalking that up to fatigue.  Once we moved on from freestyle to stroke the pain went away.  Also during some of the 25 free sprints I tried to work that straight arm freestyle technique.  I'm going to have to keep on working that to see if it'll do me any good on relay sprints.

I think that was the whole workout.  Maybe another drilling part set.  But for the most part that was it.  I have a bit of "white liberal guilt" going on this morning.  Living in Los Angeles seeing a homeless person on the street really doesn't even make me normally think twice about it.  But as I was walking to the pool a young guy was walking barefoot, shorts inside out and a tee shirt.  He looked like he had a very fun night and was lost.  Either the drugs had made me disoriented or the drugs and maybe being from out of town.  I saw him staggering a bit.  I almost wanted to stop and talk to him.  See if he was okay.  But I didn't.  So after workout I tried to see if I could find him on my way home.  Figured he might still be stumbling or passed out on a stoop somewhere.  I didn't find him and now I sorta think I should have stopped on my way to swim. He didn't look like your typical homeless person he just looked like a guy who had a bit too much fun the night before and was trying to find his wits.  I'm sure he is either sobering up in a prison cell or some alley by now.  Just had to share that and get a little guilt off my chest.

After swimming last night I had my doubts about swimming this morning.  I should have trusted my gut and stayed in bed.  I joined the 1 Hour Club which is that group of swimmers that get out after 1 hour no matter how long or short the workout is.  I may keep to the 1 hour club during the morning swims for another week or so.  During the workout when I swam backstroke I took my time and worked on my technique.

I don't really count Wednesday workout as a real swim practice. I was loafing it and just splashing around.  Tonight was my first post National's workout.  Boy was it tough and am I going to feel it tomorrow.  As the workout went on my lane of 4 swimmers slowly bit by bit dwindled down to just me.  Which was good as I got some coaching on my backstroke.  I know I say this at least once a year but I really am going to work on my technique this year!

And that was it.  It was a killer workout.  I'm beat and need to rest.  I know sometime a few weeks ago I stopped adding up the yardage.  I'll go back and fix the posts and will start doing that again tomorrow.  In case anyone cares.  I find the numbers interesting  to look at.

I just had my most painful and worst workout swim ever.  A combo of still recovering from Nationals, yesterdays trip to the gym and some wine last night all added up to one bad workout.